Prices paid by U.S. consumers climbed in July at a more moderate pace, though not enough to provide major relief from the cost increases weighing on sentiment and driving policy debate. 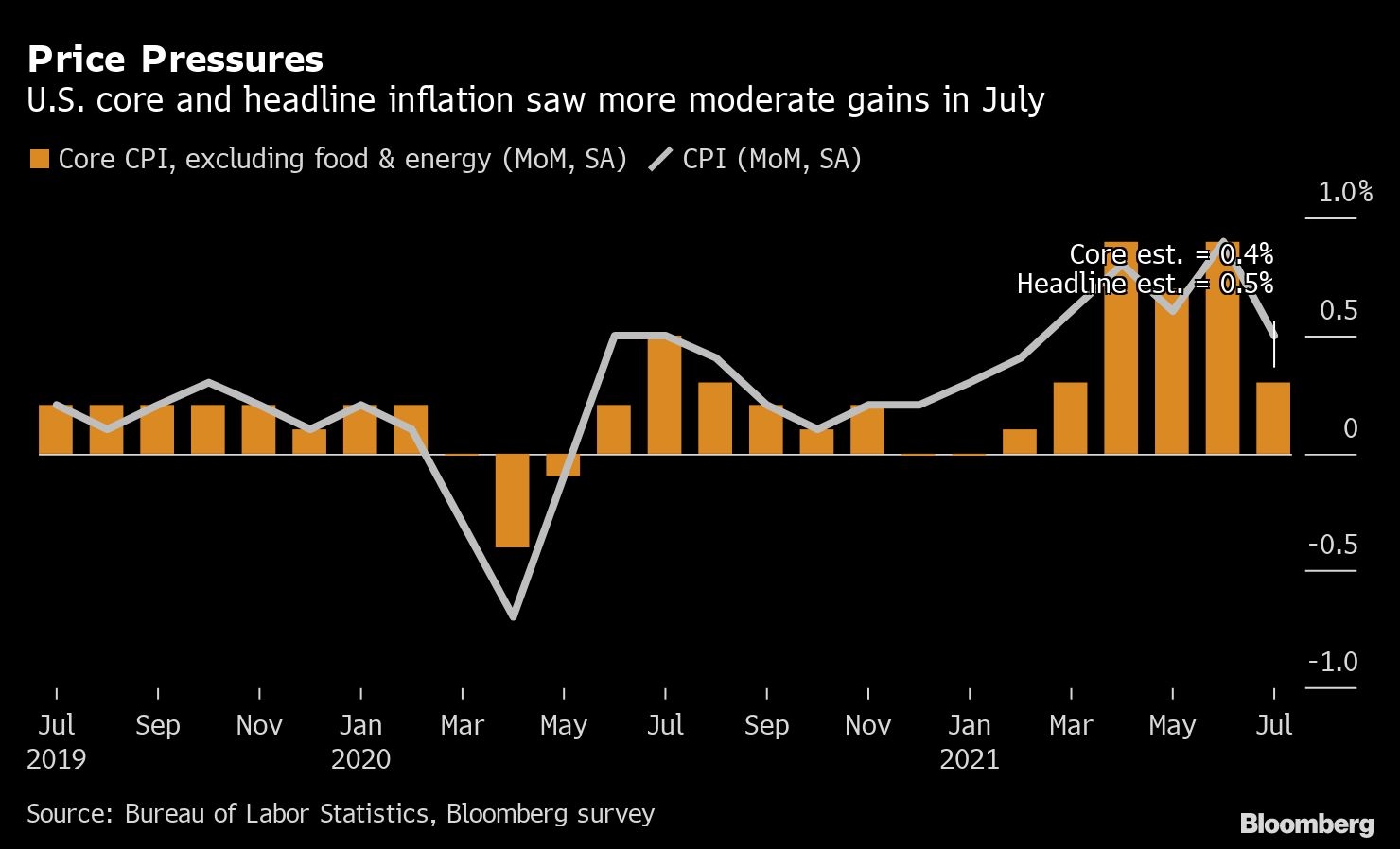 Faced with supply constraints and surging demand, businesses are raising prices for goods and services as cost pressures mount. Ongoing challenges including materials shortages, shipping bottlenecks and hiring difficulties will likely continue to put broader upward pressure on prices in the months ahead.

At the same time, some of the price surges linked to the economy’s reopening are beginning to ebb. The Labor Department said a smaller gain in the costs of used cars and trucks was a “major factor” in the moderation of the core CPI.

“July was a bit of a transition month, as the reopening surge in prices started to abate while other categories show signs of taking the baton,” Stephen Stanley, chief economist at Amherst Pierpont Securities, said in a note.

The gain in the overall CPI from the prior month was in line with economists’ projections, while the core rate was less than forecast.

The S&P 500 opened higher, while the yield on the 10-year Treasury fell along with the U.S. dollar.

Federal Reserve Chair Jerome Powell has emphasized elevated inflation will ultimately prove temporary, but it’s unclear when supply constraints will ease. A New York Fed survey released Monday showed consumers’ inflation expectations over the next year are at a record high, while expectations for the medium term rose to an eight-year high.

The path of inflation in the coming months has policy implications both for the Fed, in terms of its timeline for reducing monetary support, as well as President Joe Biden.

Persistent inflation may make it harder for Biden to win unified Democrat support for another US$3.5 trillion in social spending after the trillions of dollars of fiscal relief already injected into the economy since the start of the pandemic.

Biden touted the report as evidence inflation is slowing in comments Wednesday.

“The July CPI report showed reopening-sensitive categories moderating in importance, posting the weakest contribution to the month-over-month gain since March...Services categories will take the baton over time, evident in our view that rents -- a third of the CPI -- will look sturdier over the second half.”

Many companies have increased -- or plan to increase -- consumer prices to offset higher material and production costs, including Colgate-Palmolive Co., Procter & Gamble Co. and Kimberly-Clark Corp.

American consumers are experiencing higher prices for dining out, groceries and personal care, the CPI data showed. Costs of food away from home rose 0.8 per cent in July, the biggest monthly advance since 1981. 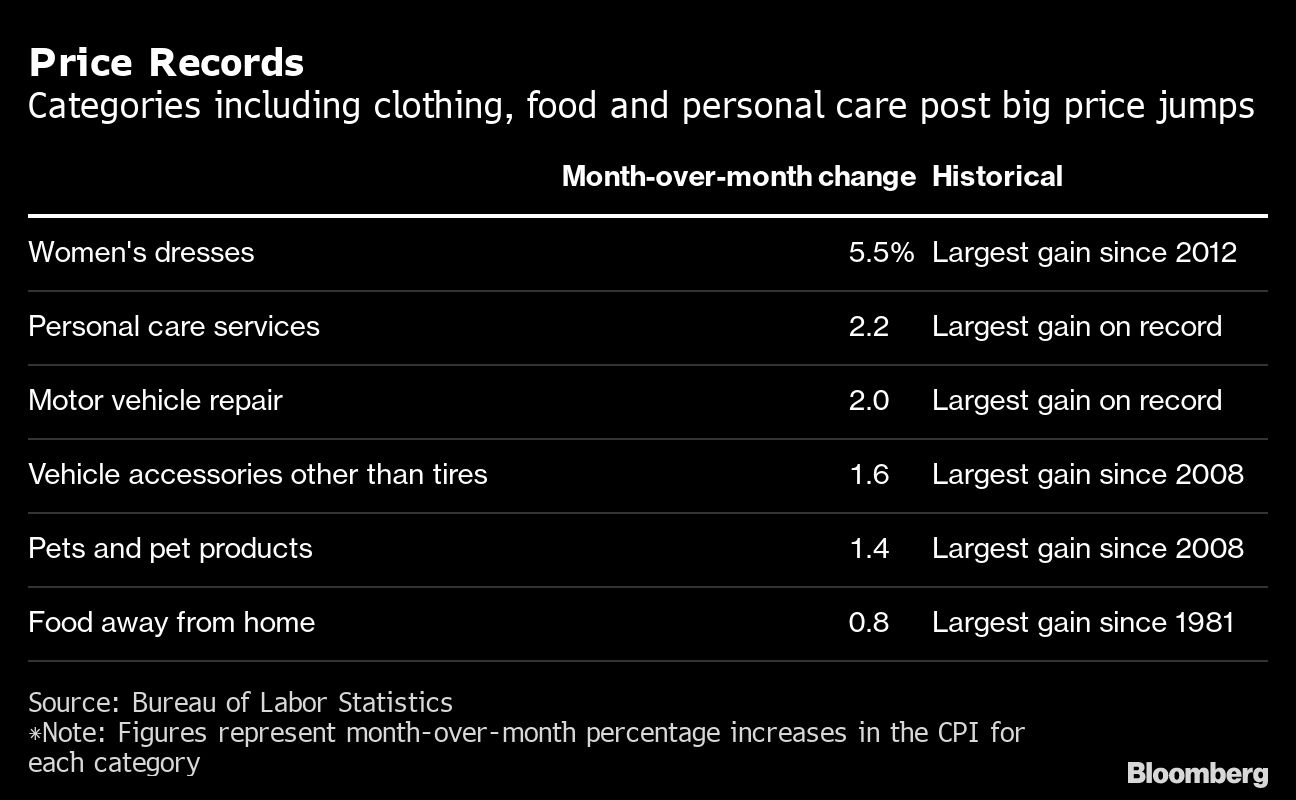 Bolstered by pandemic savings, eager-to-spend consumers have been price takers as of late. Spending patterns, however, may change when the surge in demand from reopening eases and if concerns about the delta variant curb economic activity.

Shelter costs, which are seen as a more structural component of the CPI and make up about a third of the overall index, increased 0.4 per cent and accounted for more than half the monthly gain in the core index.

The rent index rose 0.2 per cent, as owners’ equivalent rent -- a gauge of price appreciation for purchased homes -- climbed 0.3 per cent. While rents and home values have jumped recently, it takes time for the price shifts to feed into the official inflation measures.

The cost of lodging away from home, which includes hotel stays, continued to soar, rising 6 per cent in July.

“For now, the streak of outsized inflation surprises is over,” Jefferies’ Aneta Markowska and Thomas Simons said in a note. “However, it remains to be seen whether the period of elevated price pressures is truly over.”