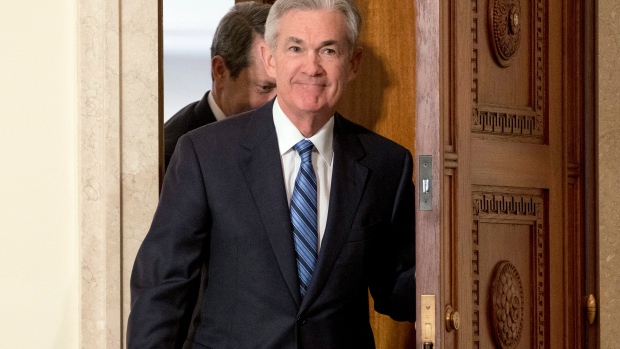 In this Monday, Feb. 5, 2018, file photo, Jerome Powell arrives to take the oath of office as Federal Reserve Board chair at the Federal Reserve in Washington. , AP Photo/Andrew Harnik, File

WASHINGTON - U.S. consumer prices rose more than expected in January, with a measure of underlying inflation posting its biggest gain in a year, strengthening expectations the Federal Reserve will have to quicken the pace of interest rate increases this year.

The fairly strong inflation report from the Labor Department on Wednesday put more pressure on U.S. financial markets, which were spooked by a surge in annual wage growth in January.

Prices of U.S. Treasuries fell on the inflation data. The dollar initially rose against a basket of currencies but later surrendered the gains. Stocks on Wall Street opened lower before erasing losses.

Investors worry that inflation, which is seen as being driven by a tightening labor market and increased government spending, could force the Fed to be more aggressive in raising rates this year than currently anticipated.

That would slow economic growth. The U.S. central bank has forecast three rate hikes for this year, with the first increase expected in March.

"The Fed's job now is to prevent the economy from overheating," said Gus Faucher, chief economist at PNC Financial in Pittsburgh. "The Fed's task is complicated by the recent tax cuts and spending deal."

The Labor Department said its Consumer Price Index increased 0.5 per cent last month as households paid more for gasoline, rental accommodation and healthcare. The CPI rose 0.2 per cent in December. The year-on-year increase in the CPI was unchanged at 2.1 per cent as the large price gains from last year dropped out of the calculation.

Excluding the volatile food and energy components, the CPI shot up 0.3 per cent. That was the largest increase since January 2017 and followed a 0.2 per cent rise in December. The year-on-year rise in the so-called core CPI was unchanged at 1.8 per cent in January, also because of less favorable base effects.

Economists polled by Reuters had forecast the CPI increasing 0.3 per cent in January and the core CPI rising 0.2 per cent.

The core CPI is viewed as a better measure of underlying inflation trends. The Fed tracks a different index, the personal consumption expenditures price index excluding food and energy, which has consistently undershot the central bank's 2 per cent target since mid-2012.

Base effects will turn more favorable in March, which economists say would set the course for higher annual inflation readings. Average hourly earnings jumped 2.9 per cent on an annual basis in January, the largest rise since June 2009, from 2.7 per cent in December.

A pickup in wage growth as the labor market hits full employment is expected to contribute to higher inflation this year. Price pressures are also seen being fanned by fiscal stimulus in the form of a $1.5 trillion tax cut package and increased government spending.

Rising inflation could hurt consumer spending, which is already showing signs of slowing. A separate report from the Commerce Department on Wednesday showed retail sales decreased 0.3 per cent in January, the largest decline since February 2017, after being unchanged in December.

"Consumers can make up for lost time," said Jennifer Lee, a senior economist at BMO Capital Markets in Toronto.

Inflation last month was driven by gasoline prices, which rebounded 5.7 per cent after falling 0.8 per cent in December. Crude oil prices surged in January on strong global demand and a weaker dollar. Food prices rose 0.2 per cent in January, likely reflecting dollar depreciation.

The core CPI was boosted by rising rents. Owners' equivalent rent of primary residence, which is what a homeowner would pay to rent or receive from renting a home, gained 0.3 per cent after rising by the same margin in December.

The cost of healthcare services increased 0.4 per cent, with prices for hospital care jumping 1.3 per cent and the cost of doctor visits rising 0.3 per cent. Apparel prices surged 1.7 per cent, the biggest increase since February 1990.

There were also increases in the cost of motor vehicle insurance, which recorded its largest gain since November 2001. Prices of personal care products posted their biggest increase in three years. But consumers got some respite from airline fares, which fell for a third straight month in January.

Prices of new motor vehicles slipped last month and the costs of recreation, communication and alcohol were unchanged.

With the January inflation report, the government incorporated some methodology changes.

Used car prices changed to a single-month price change from a three-month moving average. Smart phones are now quality-adjusted to account for the rapid rate of technological advancements and improved quality to customers.