U.S. CPI shows higher than expected inflation but nothing like we saw in Q2: Senior economist

Prices paid by U.S. consumers rose in September by more than forecast, resuming a faster pace of growth and underscoring the persistence of inflationary pressures in the economy.

The consumer price index increased 0.4 per cent from August, according to Labor Department data released Wednesday. Compared with a year ago, the CPI rose 5.4 per cent, matching the largest annual gain since 2008. 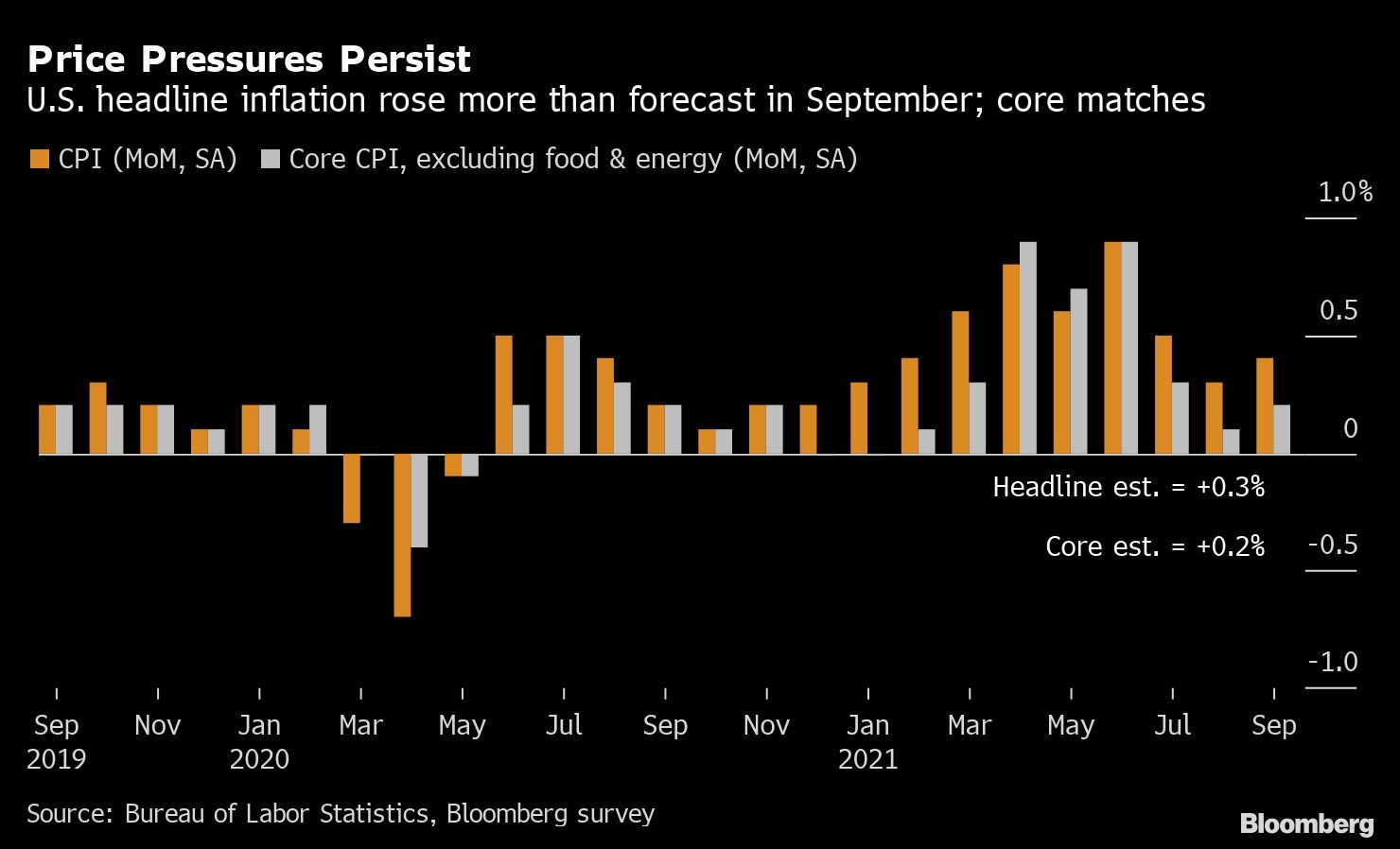 Excluding the volatile food and energy components, so-called core inflation rose 0.2 per cent from the prior month.

A combination of unprecedented shipping challenges, materials shortages, high commodities prices and rising wages have sharply driven up costs for producers. Many have passed some portion of those costs along to consumers, leading to more persistent inflation than many economists -- including those at the Federal Reserve -- had originally anticipated.

U.S. stocks opened higher while the yield on the 10-year Treasury declined. The median estimate in a Bloomberg survey of economists called for a 0.3 per cent monthly gain in the overall measure and a 0.2 per cent advance in the core rate.

The CPI data reflects crosscurrents in the economy. Hotel fares fell, reflecting the impact of the delta variant on travel, but inflation is broadening out beyond categories associated with reopening. That’s “worrisome” from the Fed’s perspective, Bloomberg Economics said in a note.

Higher home prices are now starting to filter through in the data. Rent of primary residence jumped 0.5 per cent, the most since 2001, while a measure of homeowners’ equivalent rent posted the biggest gain in five years. Shelter costs, which are seen as a more structural component of the CPI and make up about a third of the overall index, could prove a more durable tailwind to inflation.

Non-reopening components in CPI have larger contribution to September increase

“Between now and the medium-term, investors need to be braced for data which will appear, at least, to threaten the ‘transitory’ story,” Ian Shepherdson, chief economist at Pantheon Macroeconomics, said in a note.

Following the data, overnight interest rate swaps fully priced in a September 2022 rate hike followed by a second by March 2023.

American consumers are also experiencing higher prices for new vehicles and household furnishings and supplies, which increased by a record 1.3 per cent, the report showed. And looking ahead, elevated energy prices are set to take an additional bite out of workers’ paychecks.

While wages have strengthened in recent months, higher consumer prices are eroding Americans’ buying power. Inflation-adjusted average hourly earnings rose 0.2 per cent in September from a month earlier, but are down 0.8 per cent from a year ago, separate data showed Wednesday.

“Come January, beneficiaries can expect to see one of the largest increases in monthly benefits not only in their time on the program, but in the program’s past 40 years,” said Jason Fichtner, chief economist at the Bipartisan Policy Center.