Inflation resurgence in 2022 will be 'the real deal': Bulltick Capital Markets' Rooney Vera

U.S. consumer sentiment rose in early June by more than expected on improved outlooks for the economy and moderating inflation expectations.

The University of Michigan’s preliminary sentiment index increased to 86.4 from 82.9 in May, data released Friday showed. The figure came in above the median 84.2 in a Bloomberg survey of economists.

Consumers expect inflation to rise 4 per cent over the next year, down from 4.6 per cent in the May survey. They expect prices over the next five years to increase 2.8 per cent, compared to 3 per cent last month. 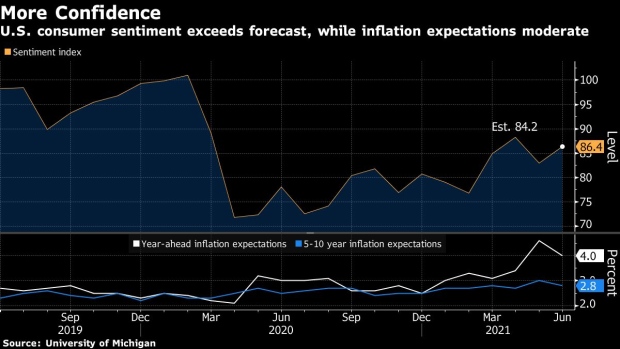 “Stronger growth in the national economy was anticipated, with an all-time record number of consumers anticipating a net decline in unemployment,” Richard Curtin, director of the survey, said in the report.

“Rising inflation remained a top concern of consumers, although the expected rate of inflation declined in early June,” Curtin said.

Consumers are more upbeat as travel restrictions lift, the weather warms and health concerns ebb. At the same time, policy makers and investors are closely monitoring inflation expectations as the economy accelerates.

Even though inflation expectations eased overall, lower-income and older households were more likely to report that the recent pickup in prices already had a negative impact on their living standards.

The share of consumers reporting high home prices reached a record high, while mentions of more expensive vehicle and household durable goods were the highest since 1981.

A report Thursday from the Labor Department showed that the consumer price index rose in May by more than forecast, extending a months-long buildup in inflation.

A measure of the year-ahead economic outlook reached the highest level since before the pandemic.