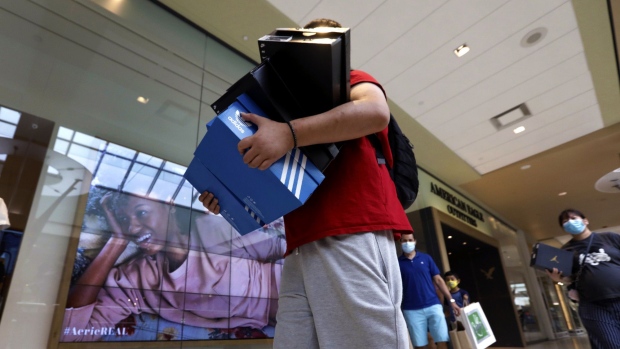 A shopper carries boxes of shoes at the Queens Center shopping mall in the Queens borough of New York on Sept. 9. , Photographer: Peter Foley/Bloomberg

U.S. consumer sentiment ticked up in early October to a seven-month high on an improved economic outlook, though confidence remained well below pre-pandemic levels.

The University of Michigan’s preliminary sentiment index for October advanced to 81.2 from a final September reading of 80.4, according to data released Friday. The median estimate from economists surveyed by Bloomberg was for 80.5; the index was at 101 in February, near the highest since 2004.

The gauge of current conditions decreased 2.9 points to 84.9, while a measure of expectations rose 3.2 points to 78.8.

While the result indicates pessimism about the future has diminished a bit, views of buying conditions for durable goods worsened in the survey, pointing to slightly less appetite for big-ticket purchases ahead of the holiday shopping season. In addition, the gap between Democrats and Republicans on sentiment remained wide.

With coronavirus infections accelerating again in the U.S. and congressional talks for further stimulus at a stalemate, the economic rebound and labor market face headwinds that will challenge whoever wins the Nov. 3 presidential election.

“Slowing employment growth, the resurgence in COVID-19 infections, and the absence of additional federal relief payments prompted consumers to become more concerned about the current economic conditions,” Richard Curtin, director of the survey, said in a statement. “Those concerns were largely offset by continued small gains in economic prospects for the year ahead.”

A separate government report earlier Friday showed retail sales rose in September by the most in three months.

The preliminary survey covers responses received through Oct. 14. The final report for the month will be issued Oct. 30.