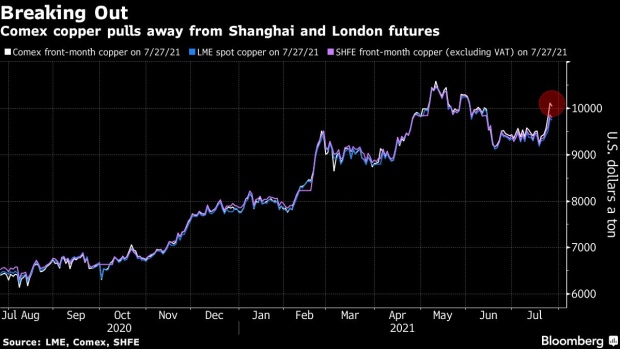 (Bloomberg) -- U.S. copper buyers are paying the world’s highest prices for the metal as soaring demand and logistical bottlenecks send New York futures surging ahead of contracts in London and Shanghai.

Copper futures for September delivery on the Comex have been trading at a premium to those for December delivery since Friday in a condition called backwardation that suggests tight near-term supplies and rising demand. is the only main exchange where the metal is trading in backwardation right now, and inventories at warehouses tracked by the bourse have been declining since early April.

As a result, a New York trader is paying over $250 a metric ton more for Comex copper than the metal traded on the London Metal Exchange on Tuesday, the widest since 2011. The New York price is also higher than in China, excluding a value-added tax on Shanghai purchases.

The premium underscores investor assessments of diverging outlooks for the regions. Commodities from copper to steel have posted big gains this year, partly on bets that massive U.S. government spending to rebuild infrastructure will boost demand. Pandemic-triggered supply-chain woes have also helped lift prices. Meanwhile, Europe has been slower to recover from the pandemic, while concerns over China’s efforts to rein in inflation have clouded prospects for commodity gains there.

“At the root of it all is the friction in global trade, but it’s also a reflection of the fact that demand is strong. It genuinely looks like a tight market,” said Oliver Nugent, an analyst at Citigroup Inc. “If you look outside of the LME, and you look at the U.S. and even at China, you can see that they’re moving in the right direction.”

The tightness in the U.S. market is in contrast with the situation on the London Metal Exchange. LME copper cash contracts are trading at a discount to futures contracts, while stocks tracked by LME warehouses have been on the rise since the beginning of June.

“If you look at Rotterdam, and how loose the spreads are generally on the LME, it’s such a big tanker to turn around, and it looks like there’s a long way to go,” said Nugent, referring to copper stocks at LME Rotterdam warehouses, which have risen more than 40% since the start of last month.

Metals including copper slipped on Tuesday amid China’s tech crackdown and concerns over the spreading delta variant of Covid-19. Comex copper futures for September delivery fell 0.9% to $4.5445 an ounce in New York, equivalent to about $10,019 a metric ton. In London, LME copper slipped 0.5% at $9,758.50 a ton.

September copper on the Shanghai Futures Exchange ended at 72,010 yuan a metric ton on Tuesday, equivalent to about $9,800 a ton when the value-added tax is excluded.