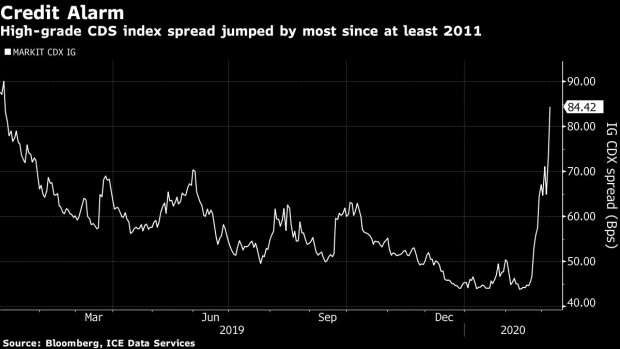 U.S. credit markets are suffering their worst day in a decade as fears intensify that the spreading coronavirus will hurt corporate income and some companies’ ability to repay debt.

Bonds of American Airlines Group Inc. dropped to near distressed levels as companies worldwide canceled business travel and a growing list of conferences and sporting events were called off. Debt of rental-car companies and cruise lines came under increasing pressure. And energy company bonds and loans fell further into distress as crude oil prices slumped.

The sell-off triggered a surge in a derivatives index that investors use to hedge against losses, pushing it up by the most since at least 2011, prices compiled by Bloomberg show. The credit-market meltdown was the culmination of a week in which investors withdrew the most cash in at least 10 years from U.S. funds that buy corporate bonds and loans.

“This is what the start of a recession after a long bull market feels like,” said John McClain, a portfolio manager at Diamond Hill Capital Management. “This is the first day of seeing some panic in the market.”

While stocks have sold off over the past two weeks in dramatic fashion, the drop in credit had largely been orderly until now, market participants say. They’re bidding securities even lower to get trades done, making transaction costs that much higher. For some, it’s the first time they’ve experienced such volatility in their careers.

Most of the selling pressure is hitting on the more liquid names such as General Electric Co. in investment grade and Charter Communications Inc. in high yield. Bonds sold this week from well-known issuers such as McDonald’s Corp. and Cigna Corp. have been battered in the secondary market. Leveraged loans continued a two-week plunge, with more loans dropping below 90 cents on the dollar after trading closer to 99 or par before the sell-off.

“It feels very tenuous,” said Jerry Cudzil, head of U.S. credit trading at TCW Group. The market is illiquid, and buyers are naming their price, he said.

Comments Friday morning in New York from White House economic adviser Larry Kudlow seemed to remove the worst sense of panic in the market. Kudlow favors “timely and targeted micro-measures” to respond to the economic impacts of the coronavirus, he said during an appearance on Bloomberg Television.

Despite the slight reprieve, the pain is widespread, with travel companies and energy bearing the brunt of the pain. American Airlines and Viking Cruises Ltd. are among the worst travel industry performers in the high-yield market Friday, with some of their bonds yielding more than 9 per cent, according to Trace.

The cost of credit default protection on Royal Caribbean Cruises Ltd. surged 221 basis points to 615 points, the highest level since 2011. Energy bonds have plunged with oil, affecting investment-grade companies like Hess Corp. and cuspier borrowers like Chesapeake Energy Corp., whose 2025 bonds are trading at just 40 cents on the dollar.

Some of the prices can be misleading, said Mark Benbow, a fund manager at the Edinburgh-based Kames, who trades in both European and U.S. markets. Since traders are so averse to taking risk, it’s more reflective of bonds being marked down as opposed to real buying or selling activity, he said.

“The prices on the screen are a bit of smoke and mirrors,” Benbow said. “In reality, brokers either don’t have the inventory, or don’t want to be too long or too short on any position, so it’s very difficult to buy or sell.”

A high-yield bond trader said Friday that buying and selling offers on notes from companies hit hardest by the virus reached as wide as 2 points in morning trading as more market participants looked to offload securities than add them. A spread of 1 point or less is typical in calmer markets.

It’s also been difficult to bring new debt offerings, for those brave enough to tap the markets. After a six-day hiatus, the longest streak since July 2018, the investment-grade market reopened this week, only for some borrowers like Oneok Inc. to pay massive new issue concessions and see their bonds immediately trade lower after pricing.

In other markets like leveraged loans, borrowers aren’t even trying to bring new deals, or are rethinking plans to do so. Alkermes Plc, Thryv Holdings and Lakeview Loan Servicing yanked planned offerings on Friday, bringing the total to seven deals pulled this week. Just one deal launched this week for US$380 million, the lowest volume of 2020 so far.

Leveraged loans prices fell 0.75 cents on the dollar Friday, the biggest percentage-point drop since 2011, to trade at an average price of 94.06. Actual trading volumes, however, were muted as buyers and sellers attempted to discern the appropriate price, sources said.

“This is the first day the loan market has felt sloppier for higher levered credits and especially for credits most tied to travel, lodging and group leisure activities, even post Larry Kudlow’s comments,” said Scott Macklin, director of leveraged-loan strategies at AllianceBernstein. “There still is good two way flow for higher quality credits, albeit at lower levels.”

Loan investors are weighing a double hit. They may see weaker earnings that erodes companies’ ability to pay them back. This week’s emergency rate cut by the Federal Reserve -- and the potential for more -- is also lowering their base-level compensation on floating rate assets.