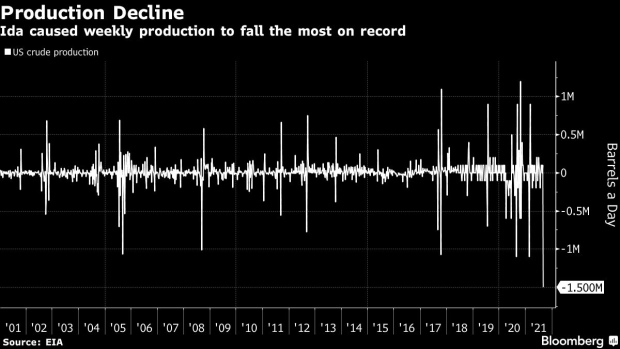 (Bloomberg) -- Even the Great Texas Freeze didn’t do as much damage to oil production as Hurricane Ida.

The historic storm, which swept through the Gulf of Mexico almost two weeks ago, drove a record 1.5 million-barrel decline in weekly crude output, according to data from the Energy Information Administration going back to 1983. Nearly, three-fourths of Gulf of Mexico oil output was still offline as of Wednesday.

The storm is the second major weather event this year that has temporarily forced more than a million barrels a day of U.S. oil output to be shut in, underscoring the increasing vulnerability of energy infrastructure to climate change. In February record-setting arctic temperatures descended across America’s South crippling production across several states, forcing weekly production to drop by as much as 1.1 million barrels day.

Although hurricanes sweep through the Gulf of Mexico every year, Ida is unusual in that the damage it left in its wake has kept so much crude production shut in more than 10 days after it made landfall in Louisiana. Most in the industry were expecting the offshore platforms to resume production quickly while worrying about the return of refineries to supply customers with fuel, as has been the case in the past. But reverse has happened with Ida, with increasingly more Louisiana refiners in the process of restarting.

Underscoring the severity of the damage from Ida, Royal Dutch Shell Plc declared force majeure on “numerous contracts.” On Wednesday, Shell also said damage assessments at its West Delta-143 facility, which serves as transfer station for all production from the vital Mars crude corridor in the Gulf, were still underway.

Ida’s impact on U.S. oil output will likely show up on EIA data for “multiple weeks,” according to Rob Thummel, a portfolio manager at Tortoise, a firm that manages roughly $8 billion in energy-related assets.

West Texas Intermediate crude future were trading at $68.72 a barrel at 1:08 p.m. in New York. They settled at $68.74 a barrel on August 27, as Gulf of Mexico producers were shutting in production for the Hurricane.