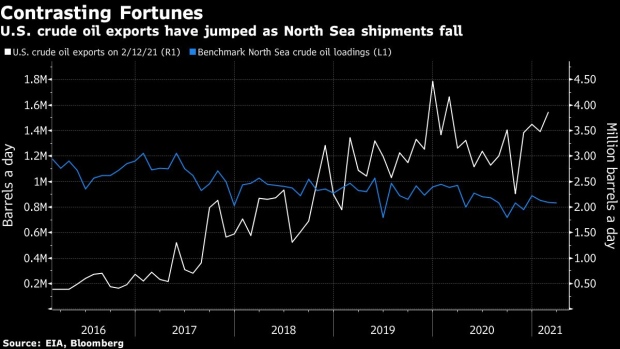 An oil pump jack in a field with wind turbines in Corpus Christi, Texas, U.S., Friday, Feb. 19, 2021. Natural gas futures fluctuated Friday as an energy crisis plaguing the central U.S. eased amid an outlook for milder weather and a decline in blackouts. , Bloomberg

(Bloomberg) -- The North Sea oil price that serves as a benchmark for millions of barrels of physical crude transactions each day will from next year be set partly through buying and selling of U.S. cargoes, triggering a rush for many parts of the market to be ready in time.

Dated Brent is used to set more than two-thirds of the world’s physical oil prices and, through a complex web of associated derivatives, ultimately influences where Brent oil futures trade. While the changes reflect the growing importance of U.S. crude internationally, they will also have significant implications for the benchmark itself, as well as associated derivatives.

“The overwhelming feedback that we’ve had is WTI is a great idea, how do we make it work,” said Joel Hanley, head of crude and fuel oil pricing at Platts.

Until now, Dated has been based on trading of barrels pumped out of North Sea fields. The addition of WTI will mean a wider pool of cargoes can influence the benchmark. The move applies to July-loading cargoes and will be reflected in Platts assessments in June.

The changes will require an overhaul of the trading terms that have underpinned the North Sea oil market for decades. Parts of the market are governed by a set of general contractual rules -- known as Shell UK 1990. Those will have to be changed, and a working group will be established to introduce the new terms.

Platts also tweaked from some elements of its original proposal. It had suggested the publication of a loading program for cargoes of U.S. crude available in the North Sea. Instead, sellers will now declare their shipments as available for sale when the cargo has loaded.