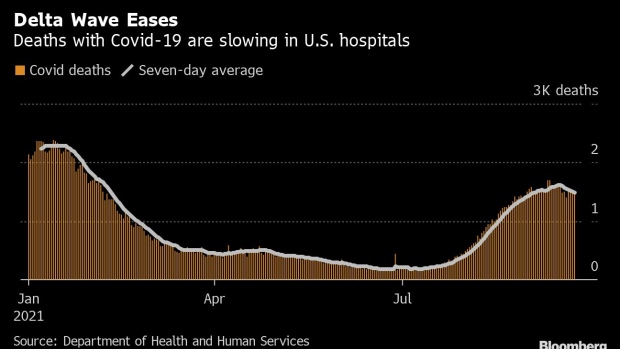 A nurse tends to a patient inside the Covid-19 unit of Salinas Valley Memorial Hospital in Salinas, California, U.S., on Thursday, Sept. 2, 2021. On Monday, 2,128 Covid-19 patients were in ICUs statewide, a number not seen since mid-February, reported the Los Angeles Times. Photographer: Nic Coury/Bloomberg , Bloomberg

The number of people dying with Covid-19 in U.S. hospitals appears to have peaked, the latest sign of reprieve after the delta variant fueled record spikes in infections in some states. Florida’s latest weekly death toll declined for the first time since late July.

President Joe Biden said 60 million Americans who got the Pfizer Inc.-BioNTech SE vaccine will soon be able to get a booster shot, after one of his top health officials overruled an advisory panel to expand eligibility. Walgreens Boots Alliance, Inc., Walmart Inc. and CVS Health Corp. said they began giving third shots across the U.S.

In Asia, Singapore made work-from-home the default and tightened other rules as it again broke a daily record for infections.

Florida reported 2,340 additional Covid-19 deaths in its latest weekly report, with the seven-day total declining for the first time since late July.

It was a 5.1% drop from last week’s pace. But even as the weekly toll slows, the numbers are revealing Florida’s delta wave to be its deadliest two-month stretch of the pandemic.

Until the fast-spreading delta variant arrived this summer, the Sunshine State had escaped with a death rate in the middle of the pack. But the variant proved capable of finding Florida’s still-significant pockets of unvaccinated seniors and middle-aged adults. Now its death rate is among the worst 10 states.

The number of people dying with Covid-19 in U.S. hospitals appears to have peaked, the latest sign of reprieve after the delta variant fueled record spikes in infections in some states.

The seven-day average of U.S. hospital deaths with confirmed or suspected Covid-19 is down 8.9% from the recent peak on Sept. 16, according to U.S. Department of Health and Human Services data.

Rochelle Walensky, the director of the Centers for Disease Control and Prevention, said she didn’t “overrule” the agency’s outside advisers on saying that people whose work puts them at high risk of exposure to Covid-19 could get booster shots.

“This was a scientific close call,” Walensky said at a White House Covid briefing the day after she issued her decision allowing boosters for those people as well as those over age 65 and certain other groups. “In that situation, it was my call to make.”

Universal mask requirements in schools reduced the spread of Covid-19 compared to schools that didn’t have mask requirements, according to new research from the Centers for Disease Control and Prevention.

After schools opened this fall, counties without mask requirements saw their rates of new pediatric Covid cases rise about twice as fast as counties where schools required masks, according to one CDC analysis. In another study focused on Arizona, schools that didn’t have universal mask rules in place were 3.5 times more likely to have Covid outbreaks than schools that did.

The CDC also reported that 96% of U.S. schools have been able to remain open for full in-person learning this year, though Covid outbreaks have triggered 1,800 closures that affected about 933,000 students.

The research team behind the messenger RNA technology used in Covid-19 vaccines won a Lasker-DeBakey Clinical Medical Research Award. Katalin Kariko and Drew Weissman “launched a novel therapeutic technology,” the award panel said in a statement. Kariko leads mRNA therapeutic work at Covid vaccine maker BioNTech SE, and Weissman is a professor at the University of Pennsylvania. The two were both based at Penn when they did the research.

Singapore made work-from-home the default and tightened other rules as it again broke a daily record for infections.

The city state announced 1,650 new infections, almost all locally transmitted cases among residents. Almost 1,100 people were hospitalized, and among those who have fallen very ill, 151 are seniors above 60 years.

In addition to the renewed work-from-home order, Singapore tightened rules to allow a maximum of two people to meet in restaurants or other social settings, as it seeks to rein in mostly mild cases that could otherwise quadruple in two weeks and overburden hospitals.

President Joe Biden said 60 million Americans who got the Pfizer Inc.-BioNTech SE Covid-19 vaccine will soon be able to get a booster shot, after one of his top health officials overruled an advisory panel to expand eligibility.

“We took a key step in protecting the vaccinated with booster shots, which our top government doctors believe provides the highest level of protection available to date,” Biden said Friday at the White House.

The Centers for Disease Control and Prevention director, Rochelle Walensky, issued a statement late Thursday advising that booster shots could be given to people with the Pfizer vaccine 6 months after the second of their first two shots.

Scotland will follow England in easing restrictions on international travel by scrapping some testing before and after arriving in the country. The pro-independence administration in Edinburgh had planned to keep PCR tests for longer with Covid-19 cases still high.

First Minister Nicola Sturgeon said this week she had concerns about the U.K. government’s policy, while the tourism industry warned that travelers would just use airports in England. “We have reluctantly concluded that, for practical reasons, alignment with the U.K. is the best option,” Transport Secretary Michael Matheson said in a statement.

Brazil’s Agriculture Minister Tereza Cristina tested positive for Covid-19, the second member of President Jair Bolsonaro’s cabinet to be diagnosed with the virus this week.

The Swiss government plans to extended free testing for those waiting for their second vaccine until the end of November. A decision will be made at the beginning of October. Free tests will be available to anyone for an additional 10 days, until Oct. 10. Public pressure to extend free testing has been mounting after the use of the Covid certificate, which attests that the holder has been jabbed, tested or has recovered from the virus, was expanded to indoor dining, fitness centers and cinemas.

More than 11% of hospital beds in U.S. hospitals were occupied by Covid-19 patients on Sept. 23, the least since Aug. 15, according to the U.S. Department of Health & Human Services.

The life expectancy of U.K. men fell for the first time on record, a sign of how the pandemic has raised mortality in the nation.

Males born between 2018 and 2020 are expected to live 79 years, according to a report from the Office for National Statistics. That’s seven weeks less than those who were born in the two years prior, and the first drop since the early 1980s when the statistics office started compiling data.

Norway to remove all domestic restrictions from Sept. 25, with the exception of the requirement to isolate if ill with Covid-19, Prime Minister Erna Solberg told reporters on Friday. Advice against all global travel that isn’t strictly necessary to countries outside the EEA, U.K. and Switzerland won’t be extended beyond Oct. 1.

“The Norwegian Institute of Public Health believes that there is little risk that the epidemic will get out of control, give a significant disease burden or threaten the health service’s capacity,” Solberg said.

Russia reported a record 828 Covid-19 deaths in the latest day, as officials warned of a new wave of the pandemic.

The real number of deaths linked to the coronavirus is likely much higher, as the initial reports by the government’s Covid-19 task force are generally revised upward.

Moscow’s Deputy Mayor Anastasia Rakova said this week that the capital was reopening coronavirus hospital wards as cases spiked, according to Ria Novosti.