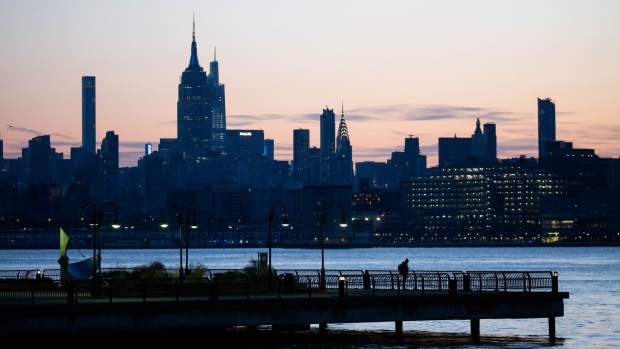 A person stands on a pier in front of a view of the Empire State building along the waterfront in Jersey City, New Jersey, U.S., on Monday, April 5, 2021. U.S. futures edged higher while most Asian stocks climbed as investors digested Friday’s unexpectedly strong jobs report. Photographer: Michael Nagle/Bloomberg , Bloomberg

(Bloomberg) -- The U.S. Justice Department has decided not to investigate New York State’s handling of the coronavirus in its nursing homes, the department said in a letter on Friday to a Republican opponent of Governor Andrew Cuomo.

Deputy Assistant General Joe Gaeta wrote to Representative Lee Zeldin that the department’s Civil Rights Division had asked for information from the Cuomo administration last August “regarding Covid-19 and nursing facilities run by, or for, the State of New York.”

Based on its findings, the department decided not to open an “investigation of any public nursing facility within New York at this time,” Gaeta said.

Critics say the Cuomo administration forced nursing homes to take coronavirus patients from hospitals and undercounted deaths to make the state look more successful. A report released in January by Attorney General Letitia James found that “a larger number of nursing home residents died from Covid-19 than the New York State Department of Health’s (DOH) published nursing home data reflected and may have been undercounted by as much as 50%.”

“As the pandemic and our investigations continue, it is imperative that we understand why the residents of nursing homes in New York unnecessarily suffered at such an alarming rate,” James, like Cuomo, a Democrat, said in the report.

The New York State Assembly has been conducting its own inquiry into allegations that the administration undercounted virus deaths at nursing homes. That is part of a broader impeachment investigation of Cuomo that also includes accusations of sexual misconduct.

Cuomo had repeatedly denied wrongdoing. His office did not immediately respond to a request for comment on Friday night.

Zeldin, a candidate for the Republican gubernatorial nomination in next year’s election, lashed out at the Justice Department decision in a statement on Friday night.

“The families and loved ones of the victims of Governor Cuomo’s failed leadership deserve transparency, accountability and the truth about the lengths of the Cuomo administration’s coverup and corruption,” he said. “The Department of Justice has now chosen to willfully participate in the effort to deny the public answers and accountability.”

Zeldin, who represents a district on Long Island, and other lawmakers had asked for the Justice Department to look into the deaths.

The governor, now in his third term, has declined to say since the allegations whether he will run for re-election. Yet despite months of turmoil and scandal, his campaign reported earlier this month that it had raised campaign raised $2.5 million in the first six months of the year.