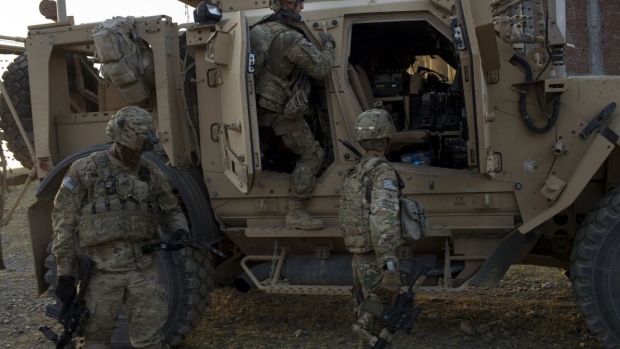 Soldiers from 2nd Platoon Fox Co. of 2-506th Infantry Battalion of the 4th Brigade of the 101st Airborne Division conduct a patrol near their base at COP Sabari in the Sabari district of Khost province, Afghanistan, on Tuesday, June 25, 2013. , Victor J. Blue

(Bloomberg) -- The U.S. and the Taliban may soon reach an agreement aimed at ending the 19-year war in Afghanistan, Defense Secretary Mark Esper said.

“The United States and the Taliban have negotiated a proposal for a seven-day reduction in violence,” Esper said in Brussels Thursday after a meeting of defense chiefs from the North Atlantic Treaty Organization. He said “progress has been made” toward a broader political agreement.

A deal would commit Taliban insurgents to curb attacks in Afghanistan and the U.S. to reduce its troop presence there. That would pave the way for negotiations between the Taliban and the Afghan government on a peace accord to end the U.S.’s longest war.

“The only solution in Afghanistan is a political agreement; progress has been made on this front and we’ll have more to report on that soon, I hope,” Esper said. He said he is consulting with other members of NATO, which runs a training mission in Afghanistan aimed at bolstering the country’s security forces.

President Donald Trump is gambling that direct engagement with the Taliban, which once provided a safe haven in Afghanistan for the al-Qaeda terrorist group, will help him meet a pledge when running for office in 2016 to get America out of what he called “endless wars.”

Led by special envoy on Afghan reconciliation, Zalmay Khalilzad, the U.S. delegation has been negotiating with the Taliban mainly in Qatar since late 2018. In September, Trump abruptly called off the talks in response to a suicide bombing in Kabul that killed an American soldier.

A U.S. defense official cautioned that, even with Taliban leaders pledging a seven-day reduction in violence, attacks would be likely to continue because of the many splinter groups in Afghanistan. The official, who briefed reporters on condition of anonymity, also said the Taliban shares the U.S. antipathy toward Islamic State, viewing the terrorist group as a dangerous threat.

The Taliban controls or contests half of Afghanistan, more territory than any time since the group was toppled in 2001 following the terrorist attacks on the U.S. The U.S. now has about 13,000 of the almost 23,000 foreign troops in Afghanistan, down from a peak of 100,000 in 2011.