A gradual but permanent shift in the US dollar is ahead: Currency strategist

The U.S. Treasury Department designated Switzerland and Vietnam as currency manipulators for the first time, while keeping China on a watch list, in the Trump administration’s final foreign-exchange policy report.

Having removed the manipulator label from China in January, the Treasury urged the world’s second-largest economy to “improve transparency” in its currency management, especially of its central bank’s relationship with state-owned banks -- which market participants say can act in the currency market with official guidance.

Switzerland was judged to have intervened in the currency market by more than was necessary to address financial-market volatility earlier this year. Vietnam also ran afoul for restraining currency appreciation at a time of rising trade surpluses with the U.S. But the Biden administration may make a different assessment next year.

Janet Yellen, who if confirmed will be President-elect Joe Biden’s Treasury secretary, has previously indicated a more understanding view of monetary policy decisions that have consequences for exchange rates. In 2019, she said, “It’s really difficult and treacherous to define when a country is gaming its currency to gain trade advantages.”

A Biden transition spokesperson declined to comment on the Treasury’s report.

Switzerland responded swiftly to the Treasury, with the central bank saying in a statement moments after that it remains “willing to intervene more strongly” in the foreign exchange market to maintain price stability.

“Switzerland does not engage in any form of currency manipulation,” the Swiss National Bank said as it sought to assure markets that it would continue to fight a strong franc to combat deflationary risks. The release came a day before the SNB’s next monetary policy decision, due Thursday at 9:30 a.m. Zurich time. 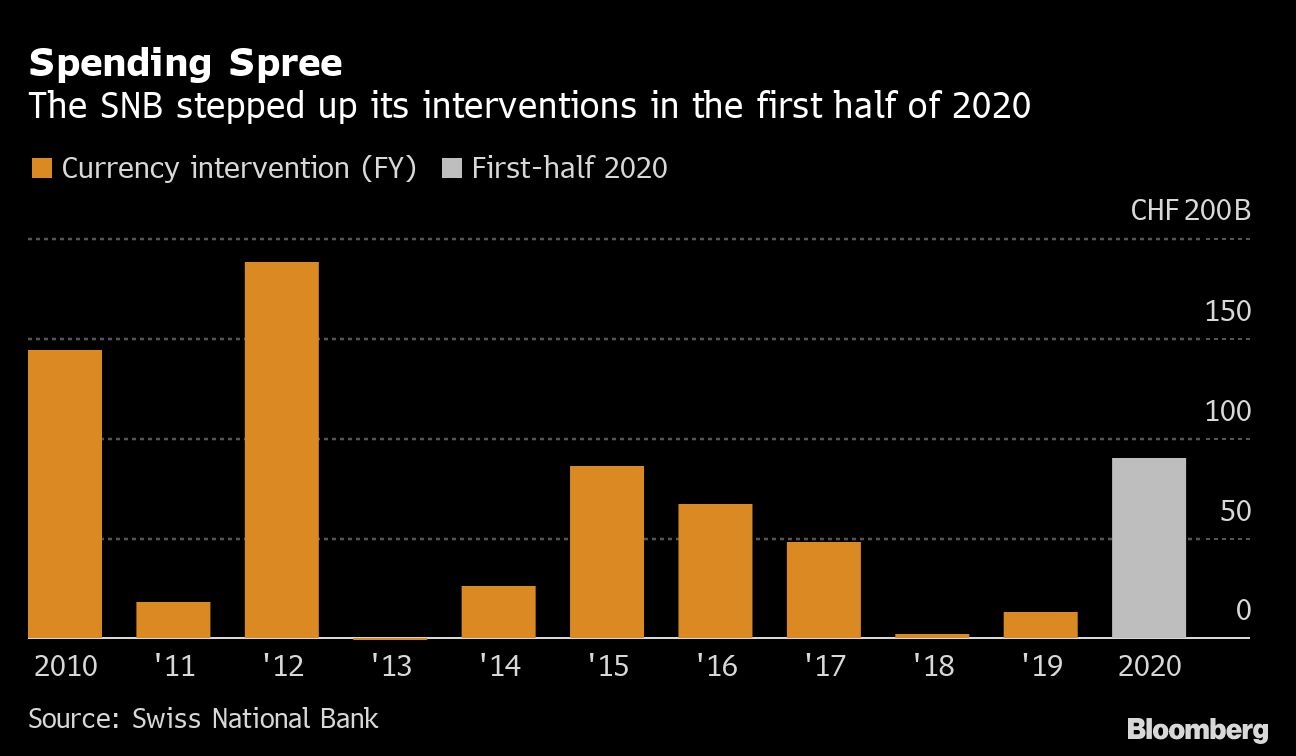 Some investors agreed with the Treasury’s assessment of Swiss policy.

“Switzerland deserves it as they are printing massive amounts of money and then buying U.S. stocks, among others,” Peter Boockvar, chief investment officer for Bleakley Advisory Group, wrote in a note.

While the Swiss franc rose -- by more than 3 per cent against the dollar over the 12 months through June -- the Treasury said that authorities “conducted largescale one-sided intervention, significantly larger than in previous periods, to resist appreciation.”

The Treasury concluded that at least some of the Swiss intervention “was for purposes of preventing effective balance of payments adjustments.” The agency suggested the Swiss National Bank look at “domestic quantitative easing” to help balance its monetary policy mix.

The SNB turned to intervention years ago because the local bond market is too small for quantitative easing. Officials have also said that in a small, trade-reliant economy money spent on fiscal stimulus will likely just flow abroad rather than boost domestic consumption.

A senior Treasury official acknowledged that explanation, while indicating that the magnitude of Swiss intervention remains a key problem for the U.S. The official briefed reporters early Wednesday on the condition of anonymity.

The Trump administration’s swift removal of China’s manipulator label just months after its August 2019 designation -- in a move days before signing a bilateral trade deal in January -- suggested a political element to the labeling. That could also argue for a different evaluation next year for Switzerland and Vietnam.

“I don’t think Yellen will be too vocal about the monetary policy side of things,” said Bilal Hafeez, CEO of Macro Hive and former head of G10 foreign-exchange and rates strategy at Nomura Holdings Inc.

Designation as a currency manipulator comes with no immediate penalties, but can escalate trade tensions.

“Treasury will follow up on its findings with respect to Vietnam and Switzerland to work toward eliminating practices that create unfair advantages for foreign competitors,” Treasury Secretary Steven Mnuchin said in a statement released Wednesday in Washington. The document scrutinizes the currency practices of 20 countries for potential manipulation over the four quarters through June. 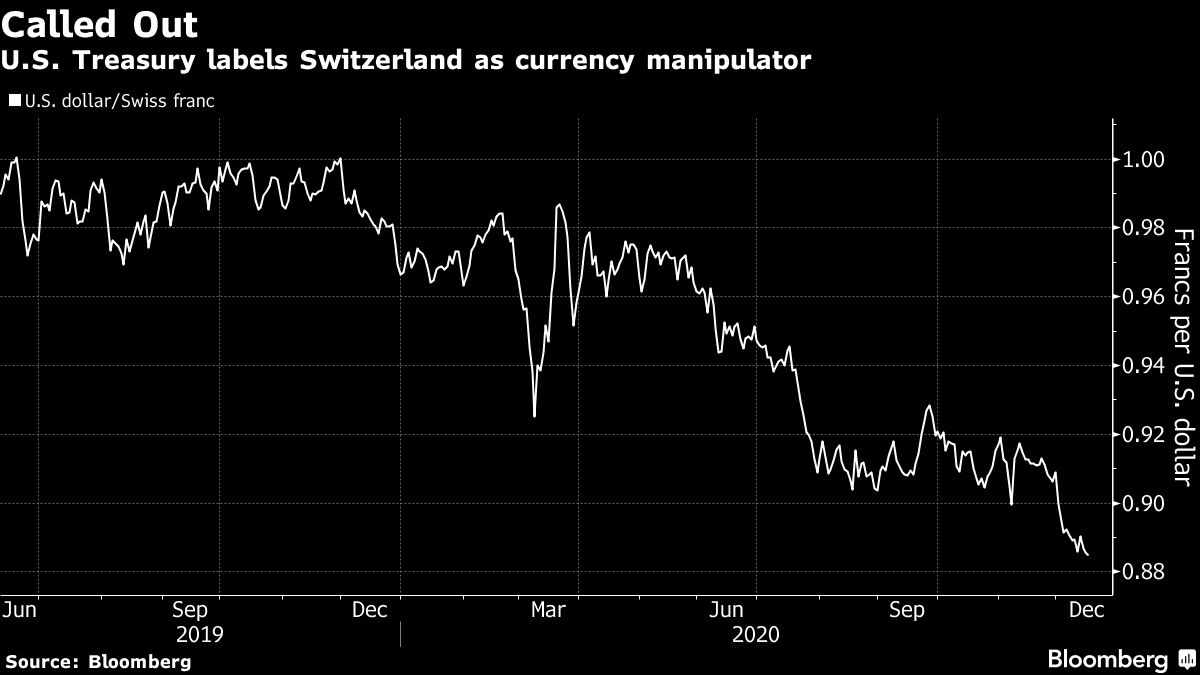 The latest report is the first time for Switzerland and Vietnam to be labeled as manipulators. Each met all three of the criteria the Treasury uses to make its assessments. Trading partners that meet two criteria are placed on the watch list, although China is on it and meets just one. The U.S. has previously made the manipulation designation twice -- for China both times -- in the 1990s and in 2019.

Thailand, Taiwan and India were added to the agency’s “monitoring list” for even closer monitoring, while Japan, Korea, Germany, Italy, Singapore and Malaysia remained, along with China.

Noting the rapid rise of Vietnam’s trade surplus with the U.S., the Treasury called for the Southeast Asian country to allow its managed currency to appreciate more rapidly to help address external imbalances.

The Treasury said Vietnamese authorities reported to the U.S. that they had made net purchases of foreign exchange of US$16.8 billion over the four quarters through June, equivalent to 5.1 per cent of gross domestic product. The agency called for greater transparency in managing the dong, and the modernization of monetary tools so the country can rely less on currency intervention.

Vietnam should also reduce trade barriers to allow a level playing field for American firms and workers, the Treasury said.

--With assistance from Catherine Bosley.