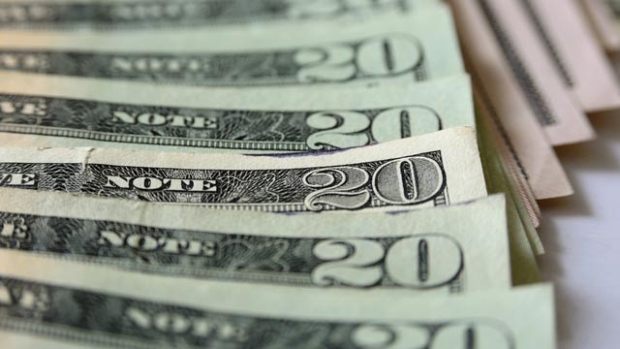 Stocks and the dollar fell and gold rose on Tuesday as investors turned wary after President-elect Donald Trump said the U.S. currency was too strong, while sterling jumped as U.K. Prime Minister Theresa May promised parliament a vote on Brexit.

U.S. stock index futures were down, an indication Wall Street would open lower. U.S. markets were closed on Monday for the Martin Luther King Day holiday.

Trump's remarks that dollar strength was hurting competitiveness pushed the greenback down across the board, especially against sterling. The pound rose sharply after May pledged lawmakers would have a vote on whatever deal she can negotiate with the European Union.

May said Britain would leave the EU's single market but would seek maximum access to it through a new trade agreement.

"The one revelation that stood out though was the intention to put any deal before parliament, which in theory should tip the balance slightly further away from a hard Brexit even if May acknowledged that we will not be seeking access to the single market," Craig Erlam, senior market analyst at Oanda said in a note.

The yen hit a six-week high of 112.74 against the U.S. currency as investors sought shelter from the mounting political risk of a week that also includes Trump's inauguration.

Investors are seeking clarity on Trump's policies after campaign pledges on tax cuts and government spending helped lift stocks and the dollar and were deemed positive for growth.

In remarks to the Wall Street Journal published on its website late on Monday, however, Trump said U.S. companies could not compete with China "because our currency is too strong. And it's killing us".

Safe-haven investments such as gold and government debt also gained.

Britain's FTSE 100 share index fell 0.8 per cent, extending losses as May spoke. The pan-European STOXX 600 index edged up 0.2 per cent, led by financials.

In Asia, Japan's Nikkei closed down 1.5 per cent at its lowest in nearly a month. MSCI's benchmark index of global stocks rose 0.2 per cent.

Yields on U.S. Treasuries, regarded as among the world's safest investments, fell. Ten-year yields lifted off the day's lows but were down 3.3 basis points at 2.35 per cent. German equivalents, the benchmark for euro zone borrowing costs, fell 2.8 bps to 0.23 per cent.

Gold hit US$1,218 an ounce, its highest in nearly eight weeks, in the run-up to May's speech before retreating to US$1,213, still up 0.8 per cent on the day. It has risen for seven consecutive days.

"Gold is going to do very well in the first half of the year due to Brexit concerns, Chinese currency pressure and uncertainty surrounding Donald Trump's policies," said Richard Xu, fund manager at China's biggest gold exchange-traded fund, HuaAn Gold.

Copper fell for a second successive day, having been under pressure around the turn of the year from a strong dollar. The metal stood at US$5,800 a tonne, down 1.1 per cent on the day.