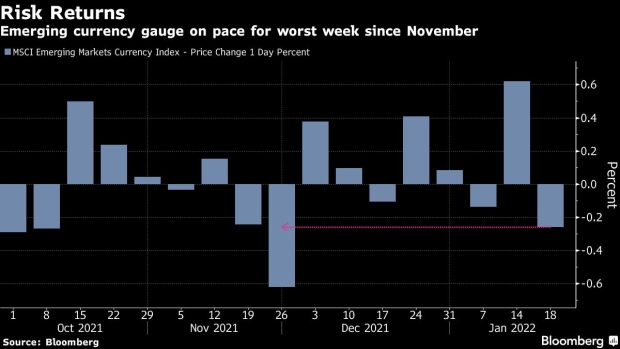 (Bloomberg) -- A rebound in the world’s reserve currency could choke the current rally of its peers in emerging markets.

That’s the view of Brendan McKenna, a Wells Fargo Securities strategist who expects investors to flock to the U.S. dollar just as underlying risks in developing economies come into focus. The firm was among the most accurate forecasters of major currencies in the fourth quarter -- and No. 1 for Latin America.

“The dynamics that have supported foreign currencies, in particular emerging market currencies, are unlikely to persist,” he said in a Tuesday report. “As the focus shifts back to country-specific fundamentals, we believe investors will again divert capital back toward U.S. dollar-denominated assets, which should be supportive of the greenback over time.”

It’s a stark outlook compared with those from Societe Generale and Morgan Stanley, which in recent days brightened their stances on some emerging assets. It also comes after the best week for a key MSCI Inc. gauge of developing currencies since early September.

Still, the index fell on Tuesday, with 21 of 24 emerging currencies down. The Hungarian forint and Turkish lira were among the biggest decliners. The dollar, meantime, was headed for its biggest gain since the first trading day of this year.

To McKenna, it’s likely that tighter Federal Reserve policy and higher bond yields will take the steam out of an early advance in developing currencies, especially in nations where local political developments could turn negative. While the dollar may gain against Group-of-10 peers this year as well, the rally will be the most intense against emerging currencies, he said.

He pointed to the risk of upcoming elections in Colombia and Brazil, along with the fallout of sharp political turns in Peru and Chile last year. Unorthodox policy in Turkey may continue to weigh on the lira, while political risk in South Africa and geopolitical tensions for Russia may keep the rand and ruble on the back foot. Diverging Chinese and U.S. monetary policy, meantime, could drag on the renminbi and put pressure on emerging Asian currency, McKenna said.

BNP Paribas strategists including Burak Baskurt are also expecting emerging currencies to weaken against the greenback as the Fed embarks on quantitative tightening, though they said much of the impact took place last year as investors started pricing in Fed tightening.