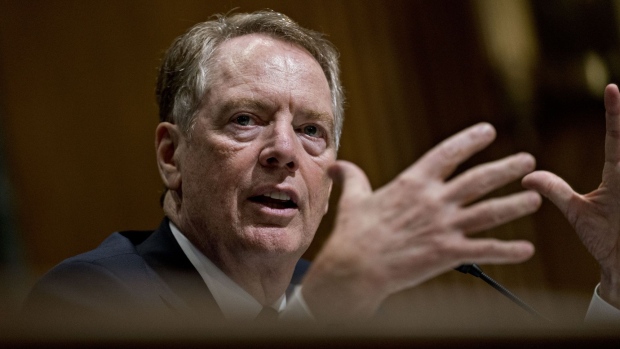 America’s top trade negotiator downplayed expectations for new agreements this year with the U.K. and European Union, reiterating that tariffs remain a potent weapon that President Donald Trump won’t hesitate to deploy in order to force concessions from Brussels and London.

U.S. Trade Representative Robert Lighthizer, during testimony before the House Ways and Means Committee on Wednesday, said the U.S. and EU have made “very little” headway this year toward completing a transatlantic trade agreement and a deal is “not looking good in the short term.”

Agriculture remains a key sticking point in the talks, he said, accusing Brussels of shielding its markets behind the “thinly veiled protectionism” of food-safety concerns.

“The president will use tariffs if he has to to get a fair shake for American businesses,” he said.

The U.S. plans to maintain its duties on European wine and will impose additional tariffs on exports from France and various other European nations if they “unilaterally” impose a digital services tax on U.S. e-commerce companies, Lighthizer said.

Last year, Trump threated to impose 100 per cent duties on US$2.4 billion worth of French wine, cheese and cosmetics in retaliation for France’s digital services tax. The U.K. also has plans to collect taxes on digital revenues.

“I agree completely with what we did at the OECD,” Lighthizer said. “The reality is that they all came together and agreed that they would screw America and that is just not something we will ever be a part of.”

Lighthizer also said he was confident the U.S. would be able to complete a trade agreement with the U.K. but said the timing of that deal remains unclear and largely depends on the outcome of the Britain’s future trade relationship with the EU.

Concluding a deal with Prime Minister Boris Johnson’s government by November is possible but unlikely, he said.

There is “still a long way to go,” Lighthizer said, and there remain “very fundamental issues we have to come to grips with.”

The U.S. and U.K. have already exchanged negotiating texts and Lighthizer said he hoped to conclude some chapters before the end of the month.

But the U.K. has concerns about certain American agricultural rules and the U.K.’s negotiations with the EU over their future relationship will have an impact on any U.S.-U.K. trade deal. “What they give Europe will effect what we get,” he said.

--With assistance from Jenny Leonard and Zoe Schneeweiss.