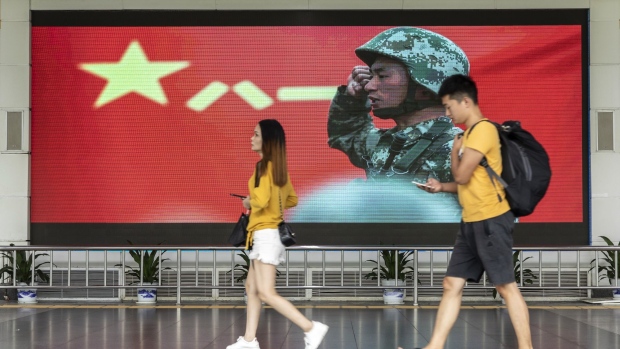 Pedestrians walk past an advertisement for the People's Liberation Army (PLA) on a screen near the Luohu border crossing in Shenzhen, China, on Thursday, Aug. 15, 2019. China plans to let Shenzhen City, which borders Hong Kong, play "a key role" in science and technology innovation in the Guangdong-Hong Kong-Macau Greater Bay Area, according to state media. Photographer: Qilai Shen/Bloomberg , Bloomberg

(Bloomberg) -- The Trump administration is close to issuing a list of 89 Chinese aerospace and other companies that have military ties and would be unable to access U.S. technology exports, Reuters reported, a move that could escalate tensions as the incoming Biden administration prepares to take over.

A spokesman for the U.S. Department of Commerce declined to comment, Reuters reported, noting that the Commercial Aircraft Corp. of China and Aviation Industry Corporation of China were among the firms on the list.