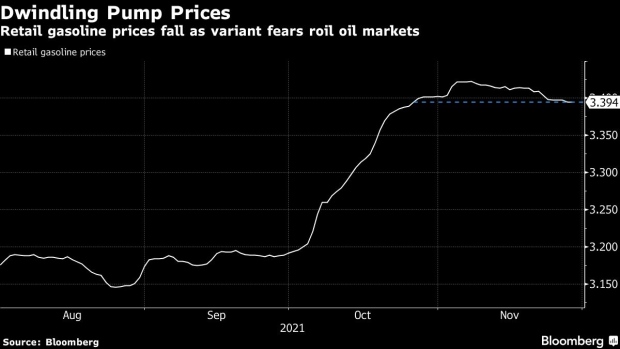 (Bloomberg) -- American drivers are set for a slight relief from stubbornly high gasoline prices at the pump as concerns over the new omicron coronavirus strain are cooling oil’s rally.

The national average retail price that reached a seven-year high of $3.42 a gallon earlier this month could drop to as low as $3.15 by Christmas, said Patrick DeHaan, head of petroleum analysis at Gas Buddy. So far, the average has only come down by 3 cents in three weeks, according to AAA data.

“For now, the only direction I see in the national average is down,” said DeHaan. “The trend is still that countries are responding by shutting things down; things are not yet reopening.”

Fears that omicron will slash demand for fuel all over again roiled oil markets on Black Friday, just as top consuming countries led by the U.S. pledged to release crude from their emergency reserves to push down prices. After the economic rebound from the pandemic, coupled with global commodity shortages and logistic bottlenecks, stoked inflation everywhere in the world this year, countries are now toying with the idea of going back into lockdowns to curb the spread of the dangerous strain.

The regular unleaded gasoline price in the U.S. is still up by about 60% from a year ago, contributing to the inflation slamming American households. Meanwhile, crude oil -- which is generally the biggest driver of gasoline prices -- has fallen 16% in about three weeks.

When oil surges, gasoline prices at the pump usually follow suit quickly, but that’s not always the case when crude drops, said Andrew Gross, a spokesman at AAA .

“It’s too soon to tell if fears of a global economic slowdown caused by the Omicron variant will push oil prices lower for the long term,” he said. “But for now, the upward pricing pressure due to tightened supply and high demand seems to have abated, and that will likely result in pump prices stabilizing.”