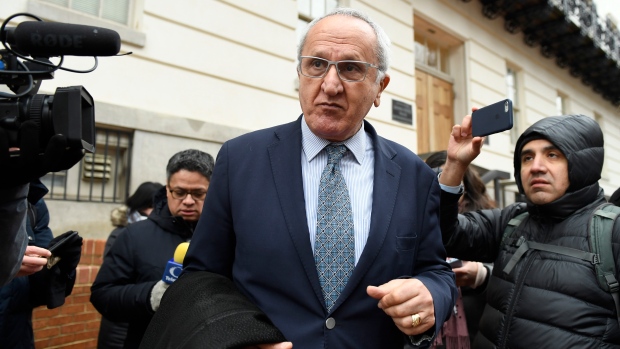 Jesus Seade, Mexican undersecretary to North America, is followed by journalists as he leaves following a meeting with U.S. Trade Representative Robert Lighthizer in Washington, Monday, Dec. 16, 2019. , The Canadian Press

The U.S. eased Mexico’s concern that it would send so-called labor attaches to monitor enforcement of USMCA trade-deal rules, avoiding the risk of a showdown between the two countries over a bill in Congress about the agreement.

“These personnel will not be ‘labor inspectors’ and will abide by all relevant Mexican laws,” U.S. Trade Representative Robert Lighthizer said in an emailed statement Monday. “The U.S. government has stationed personnel in various embassies around the world, including in Mexico, to assist foreign governments in improving work conditions. Mexico, in turn, has many attaches stationed in the U.S.”

Mexico said it wasn’t consulted on a clause in the U.S. bill that authorizes up to five American labor attaches to ensure that its southern neighbor guarantees workers their right to union representation. Mexico called on the U.S. to modify legislation, saying it would no longer consult the U.S. when it drafts its own implementation rules, Foreign Affairs Minister Marcelo Ebrard said.

Lighthizer issued the statement after a meeting with Mexico’s chief negotiator, Jesus Seade, on Monday morning. Seade subsequently told reporters that he’s “very satisfied” with the U.S. explanation, and that others in the Mexican government are satisfied as well.

Enforcement of union rights has been a key priority for Democrats in the U.S. Congress.

However, the U.S. implementing bill can’t be amended or changed in any way under the rules of the Trade Promotion Authority. The House Ways and Means Committee is reviewing the bill for approval so it can move to the House floor for a vote later this week.

Last Tuesday, the U.S., Mexico and Canada signed amendments to a free-trade agreement they first reached more than a year ago, paving the way for the three countries’ legislatures to ratify the deal