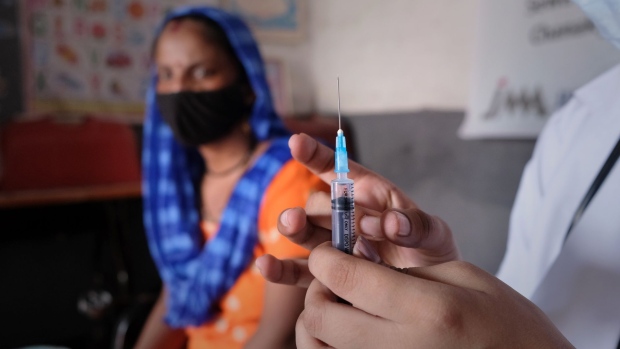 A health worker prepares a dose of the Covid-19 Covishield vaccine at a vaccination camp set up at Sewa Kendra Aaganbadi School in the Sanjay Camp area of New Delhi, India, on Sunday, Sept. 19, 2021. India, with the second largest Covid outbreak with over 33 million infections, has administered some 758 million vaccine doses, but even with that large number only a little over 13% of the country's population is fully vaccinated, according to the Bloomberg Vaccine Tracker. , Bloomberg

(Bloomberg) -- The U.S. will soon allow entry to most air travelers fully vaccinated against Covid-19. Many details of the new program -- which replaces bans on travelers from China, India, South Africa, the U.K., Europe and Brazil -- remain unclear.

India said it will resume exports of vaccines for the World Health Organization’s Covax initiative starting in October. Indonesia will allow inoculated non-essential workers back to the office, limiting capacity to 25%. Singapore is monitoring intensive care facilities amid rising cases.

Pfizer Inc. and partner BioNTech SE said their vaccine was safe and produced strong antibody responses in children ages 5 to 11 in a large-scale trial. The shot could be available for kids in the U.S. before the end of next month, Anthony Fauci said.

A member of Brazilian President Jair Bolsonaro’s delegation to the United Nations was put in isolation after testing positive for Covid-19 in New York, adding to concerns that the general assembly this week could trigger a spike in coronavirus cases in the host city.

The diplomat, part of a mission that preceded Bolsonaro’s arrival, had tested negative before leaving Brazil, according to a person familiar with the situation at the Brazilian foreign ministry. The person, who requested anonymity and isn’t authorized to discuss the matter in public, said the diplomat didn’t have contact with president -- who has refused to get a Covid shot, saying he still has antibodies from a previous infection last year.

Brazil’s foreign ministry is now tracking dozens of people with whom the person has been in touch in New York, the Brazilian press reported, citing unnamed diplomatic sources.

President Joe Biden’s chief medical adviser said that a vaccine for children ages 5 to 11 will likely be available before Halloween.

“There’s a really good chance it will be” available before the Oct. 31 holiday, Anthony Fauci, director of the National Institute of Allergy and Infectious diseases, said during an interview on MSNBC. He also said he would be in favor of schools mandating shots for kids once they are fully approved.

Nebraska is re-activating an online dashboard tracking Covid-19 cases amid an increase in hospitalizations, the Omaha World-Herald reported Monday.

Republican Governor Pete Ricketts has been criticized by the medical community for closing the site when the state’s Covid-19 emergency declaration expired in June, saying the data is vital to stopping the pandemic, according to the newspaper.

The U.S. capital will require vaccines for all adults who regularly enter schools and child-care facilities by Nov. 1, according to Washington Mayor Muriel Bowser. There will be no testing opt-out. Student athletes 12 and older will also required to get the shots to participate in school-based sports.

New York City will increase its frequency of student testing to once a week instead of its current two-week interval, Mayor Bill de Blasio said. The city’s powerful teachers union on Sunday called for weekly testing.

The union demand came after the city was forced to shut down P.S. 79, a special education school in Manhattan. All of the positive cases were among staff members, city officials said Friday, with 16 confirmed cases as of Sept. 16. Citywide, 77 classrooms were closed and 60 more are partially closed, according to the city Education Department. Since schools opened Sept. 13, 445 classrooms have been closed, according to the Department of Education.

The U.S. will require that most adult foreigners be fully vaccinated against Covid-19 to enter the country as part of a plan to ease some pandemic travel restrictions, according to a person familiar with the matter.

The measures, to be announced by President Joe Biden’s administration on Monday, amount to a sweeping reform of strict entry rules imposed on visitors to the U.S. to try to curb the spread of the virus. The person asked not to be identified ahead of the announcement.

The U.S. will relax entry rules for travelers from the U.K. and European Union who are vaccinated against Covid-19, according to a report in the Financial Times, a measure that will spur a rebound in trans-Atlantic travel.

The move is a significant easing of pandemic travel restrictions that President Joe Biden held in place as infections spread throughout the country this summer, driven by the delta variant of the virus, even as U.S. vaccination levels continued to inch higher.

Pfizer and BioNTech said their Covid-19 vaccine was safe and produced strong antibody responses in children ages 5 to 11 in a large-scale trial, findings that could pave the way to begin vaccinating grade-school kids within months.

Pressure to immunize kids has been on the climb in the U.S., where a new school year has started just as the delta variant is fueling a surge in cases.

In a trial with 2,268 participants, two shots of a 10 microgram dose -- one-third the adult shot -- produced antibody levels comparable to those seen in a trial of 16-to-25-year-olds who got the adult dose, the companies said, with similar side effects.

India will restart exports of Covid-19 vaccines for the World Health Organization’s Covax initiative from the quarter beginning October, even as it races to inoculate its own massive adult population, Health Minister Mansukh Mandaviya said Monday. The country will also resume some vaccine donations, he added, but gave no details.

Home to the world’s largest vaccine-manufacturing industry, India had been expected to be a significant supplier to the equitable vaccine initiative on which most of the world’s poor countries rely. But the government halted exports in April after the delta variant began sweeping through its major cities.

Indonesia said it will allow workers in non-essential business sectors back in the office as it loosens mobility curbs further.

The country added 1,932 Covid-19 cases on Monday, the lowest since Aug. 24 last year, and 166 new fatalities, according to health ministry data.