The U.S. economy registered a modest start to the fourth quarter as consumers restrained their spending while demand for business equipment unexpectedly jumped, likely providing enough fuel to keep the record-long expansion chugging along.

Purchases, which account for about two-thirds of the economy, rose 0.1 per cent from the prior month after adjusting for inflation. While that exceeded analyst projections for no change, it was the weakest gain since February and reflected a drop in auto demand. 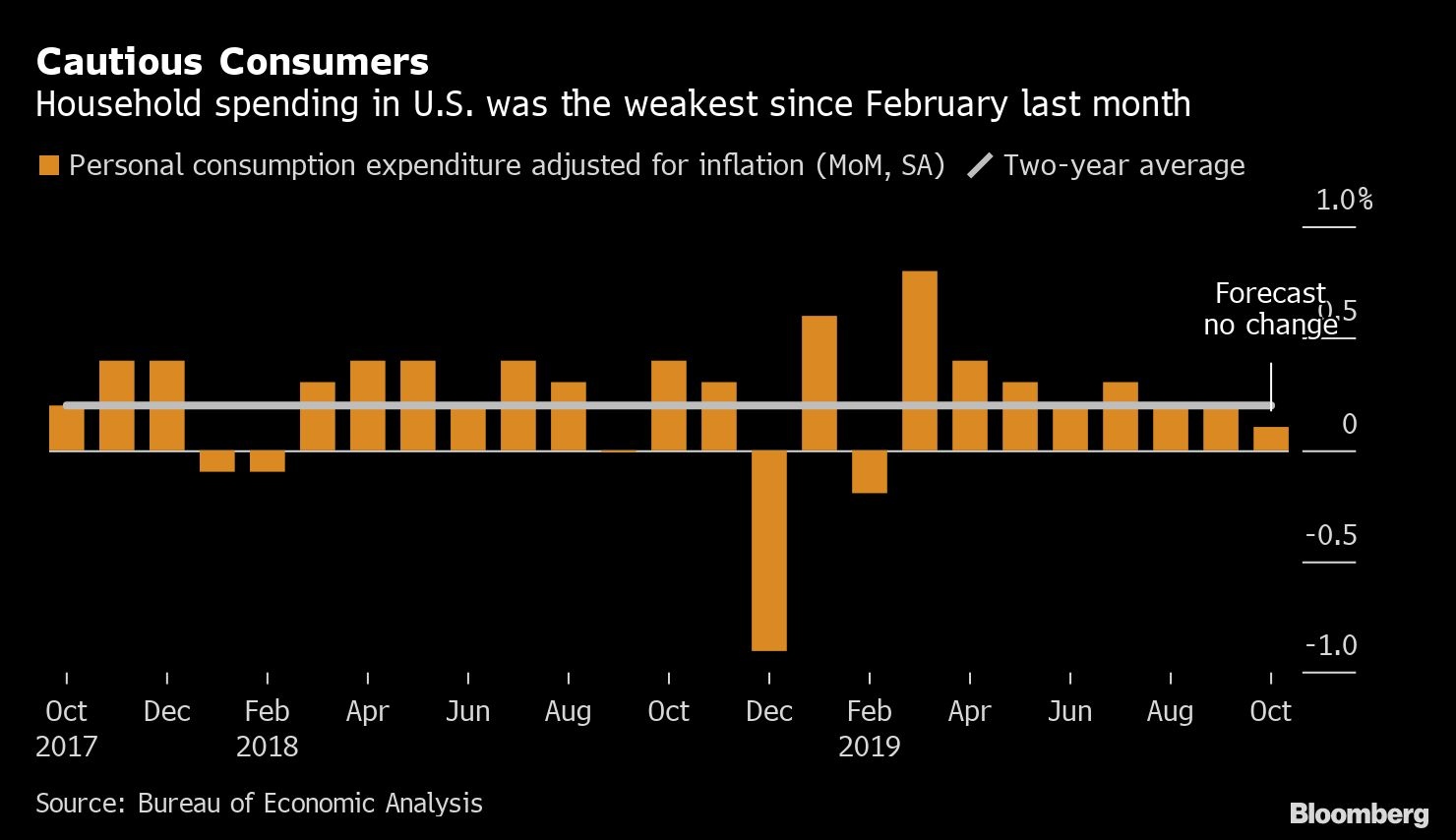 Inflation-adjusted disposable income fell 0.3 per cent, the most since 2015, though that was due to declines in interest and farm income, while wages and salaries posted a solid increase of 0.4 per cent.

The figures indicate a more-tempered pace of household spending heading into the key holiday-shopping day known as Black Friday. Consumers have been fueling growth at a time when companies have been slowing investment, global economies remain feeble and trade policy adds to the uncertainty. At this rate, consumption will cool from the third quarter’s 2.9-per-cent pace of gains, which was down from the prior period’s 4.6 per cent.

Nominal consumer spending rose 0.3 per cent in October from the prior month, matching the median estimate of economists in the Bloomberg survey.

“Overall we’re still seeing the consumer in pretty good shape,” said Sarah House, senior economist at Wells Fargo & Co., citing gains in wages and salaries. In addition, “we saw some glimmers of stabilization in the manufacturing sector,” she said.

The report showed the Fed’s preferred inflation gauge — tied to consumption — rose 0.2 per cent from the previous month and 1.3 per cent from a year earlier, both below projections. Excluding food and fuel, so-called core prices rose 0.1 per cent on the month and a less-than-expected 1.6 per cent from October 2018. The Fed targets two per cent annual inflation for the main gauge.

Earlier Wednesday, a separate report showed bookings for commercial equipment excluding aircraft — a proxy for business investment — rose 1.2 per cent following two straight declines, while shipments advanced 0.8 per cent. Those were both the largest gains since January and compared with analyst projections for declines.

Other reports showed that gross domestic product expanded an annualized 2.1 per cent in the third quarter, better than the initially reported 1.9 per cent and the prior period’s 2%, while weekly filings for unemployment benefits fell by the most since May.

While the GDP figure suggests the economy is a bit healthier than thought, the revision largely reflected more inventory accumulation, and economists project moderation in fourth-quarter growth. In addition, jobless claims tend to be volatile around the year-end holidays, partly because of difficulties adjusting for seasonal swings.

In a positive sign Wednesday, the Bloomberg Consumer Comfort Index’s gauge of buying conditions in the U.S. advanced last week to 55.3, the highest ever leading up to the first shopping day after the Thanksgiving holiday. But contract signings for previously sold U.S. homes fell in October for the first time in three months.

--With assistance from Chris Middleton, Reade Pickert and Sophie Caronello.