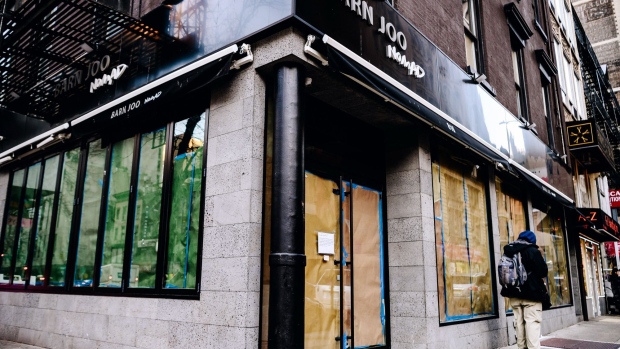 A permanently closed restaurant in New York, U.S., on Thursday, Dec. 10, 2020. New York City had its credit rating cut by Fitch Ratings because of the impact the coronavirus pandemic is having on the city's economy. Photographer: Nina Westervelt/Bloomberg , Bloomberg

(Bloomberg) -- A top economic adviser to President-elect Joe Biden warned the U.S. economy is “spiraling downward” and called for swift action to address vulnerabilities that the global pandemic has drawn into focus.

Brian Deese, who will serve as director of Biden’s National Economic Council, said Sunday that the incoming administration’s $1.9 trillion spending plan would generate “the kind of robust recovery we need.”

Biden’s proposal includes more direct payments to households, an expansion of jobless benefits, more money for state and local governments and an expansion of vaccinations and virus-testing programs.

It also calls for a $15 federal minimum wage, from $7.25, higher taxes and more regulations. Those initiatives have already alienated some Republicans and drawn criticism that the proposals are far removed from an emergency effort to shake off the coronavirus-related slowdown.

“We are at a very precarious moment,” Deese said on “Fox News Sunday.” “The economy and the virus are spiraling downward. Now is the time to act.”

Biden will need at least 10 Republican senators to successfully push through the stimulus at the rapid pace that he has called for. Deese expects the president-elect to win support despite some of the proposals being seen as a non-starter for Republicans.

The plan is “a colossal waste and economically harmful,” Republican Senator Pat Toomey said Friday. The Pennsylvania lawmaker said some of the measures could slow down recovery in the labor sector.

“The ink on December’s $1 trillion aid bill is barely dry and much of the money is not yet spent,” Toomey said.

Deese said the Biden proposal addresses vulnerabilities in the U.S. that Covid-19 has highlighted.

For example, increasing the minimum wage will provide “concrete and direct” support to Americans, he said, and providing relief to public transit systems will “avoid diminished service and diminished support” once the U.S. emerges from the crisis.

The plan also includes measures to address weaknesses in the cybersecurity, revealed by last year’s huge hack of government systems. With so many federal operations being handled online amid Covid restrictions, Deese said the systems need to be secured immediately.

Biden is negotiating for the Senate to make time to conduct an impeachment trial on President Donald Trump, confirm his cabinet and other appointees, and pass the sweeping stimulus bill at the same time.

“We do have multiple crises, we have a lot of pressing business facing the country. So certainly we understand and expect that the Senate is going to act on its constitutional duty,” Deese said. “There is precedent.”