Larry Berman on U.S. earnings and the Bank of Canada outlook

The official numbers have begun to confirm what many Americans feel in their bones: the economy is buckling once again.

Despite assurances from the Trump administration that better times are at hand, the worsening pandemic is restraining or even snuffing out the economy’s nascent recovery. From restaurant dining to air travel and now to filings for unemployment benefits, a growing body of evidence indicates America’s rebound from the pandemic is stalling days before hundreds of billions of dollars’ worth of federal aid is set to expire. 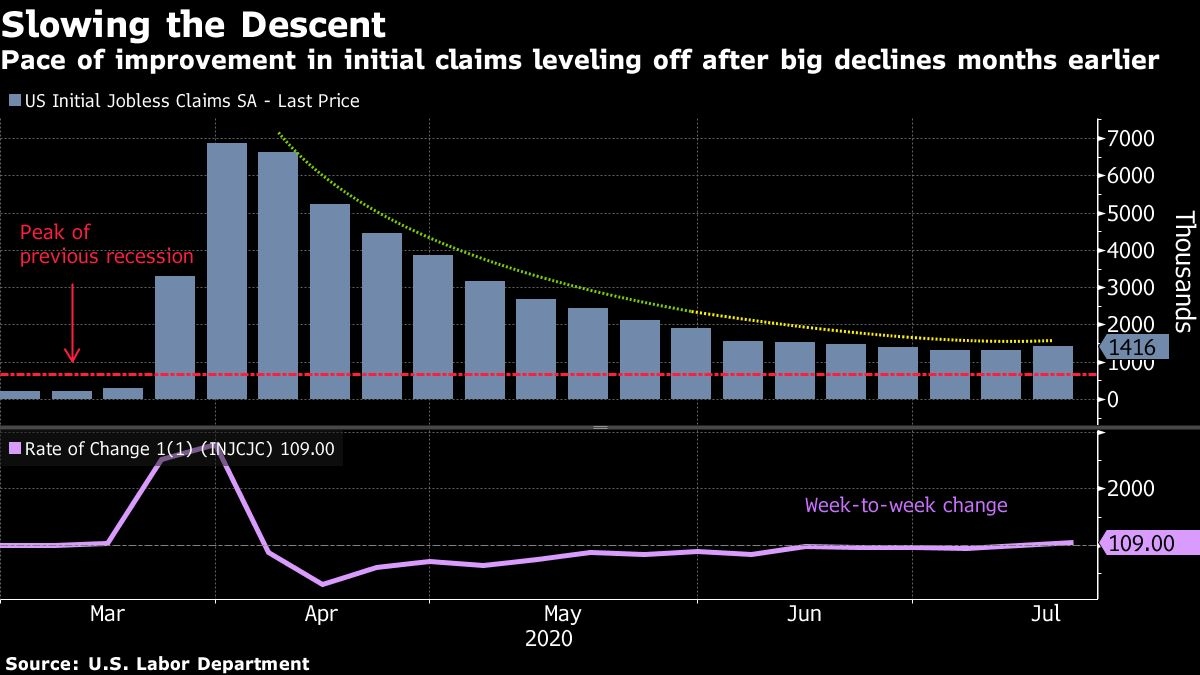 Lawmakers may eventually iron out an agreement on a new stimulus package, but for now they remain far apart on many of the key details. Whether the talks are ultimately successful or not, one thing is now crystal clear: Until a vaccine or effective treatment for COVID-19 is available, the world’s largest economy will at best post tepid, uneven growth and, at worst, endure an extended period of malaise or even a depression.

“If lawmakers don’t quickly pass another sizable rescue package that includes help to state and local governments and more income support to the unemployed, then the economy will suffer another downturn — a so-called double-dip,” said Mark Zandi, chief economist at Moody’s Analytics. “Unemployment will remain in the double digits until well after the pandemic is over.”

The jobless claims report was so grim — with the ranks of those filing for benefits swelling to 1.42 million — that it even got the attention of stock investors, a group that has been blissfully impervious to bad news of late. They pushed the S&P 500 Index down 1.2 per cent on Thursday, marking the biggest decline in almost a month.

“The fiscal response to the Covid-19 recession is running out of steam just as the rising virus case count impinges on the recovery. The most critical near-term deadline is for enhanced jobless benefits, set to run out at the end of July. A range of other programs will also need to be expanded and extended if policy is to avoid swinging from recovery driver to recessionary drag.”

Democrats have proposed a US$3.5-trillion package of virus relief that has already passed the House. Senate Republicans are working on a roughly US$1-trillion plan, but disagreements within the GOP have bogged down a detailed proposal. That’s not expected until Monday, and negotiating a compromise with Democrats may run through the first week in August.

While the report also showed a decline in continuing claims that suggests hiring has picked up, the rise in layoffs from an already-elevated level is a sign the labor market is going in the wrong direction. That could make President Donald Trump’s case for reelection even tougher than polls already show.

“This is definitely something that we’re studying very closely, looking into the underlying numbers to see if this is an anomaly or something more concerning,” Tyler Goodpseed, acting chairman of Trump’s Council of Economic Advisers, said Thursday on Bloomberg Television.

The unemployment figures followed mounting evidence of a stall in the recovery as coronavirus cases surged across much of the country over the past month. Key points from government and private reports include:

• Credit-card spending by JPMorgan Chase & Co. customers “is little changed since late June,” remaining about 12 per cent below year-earlier levels, the firm’s economists said in a note Wednesday. That follows a “rapid economic rebound” in May and early June.

• The rebound in air passengers has leveled off at less than a third of typical levels. Southwest Airlines Co. vowed Thursday to adjust its flight schedule “aggressively” in response to volatile demand. 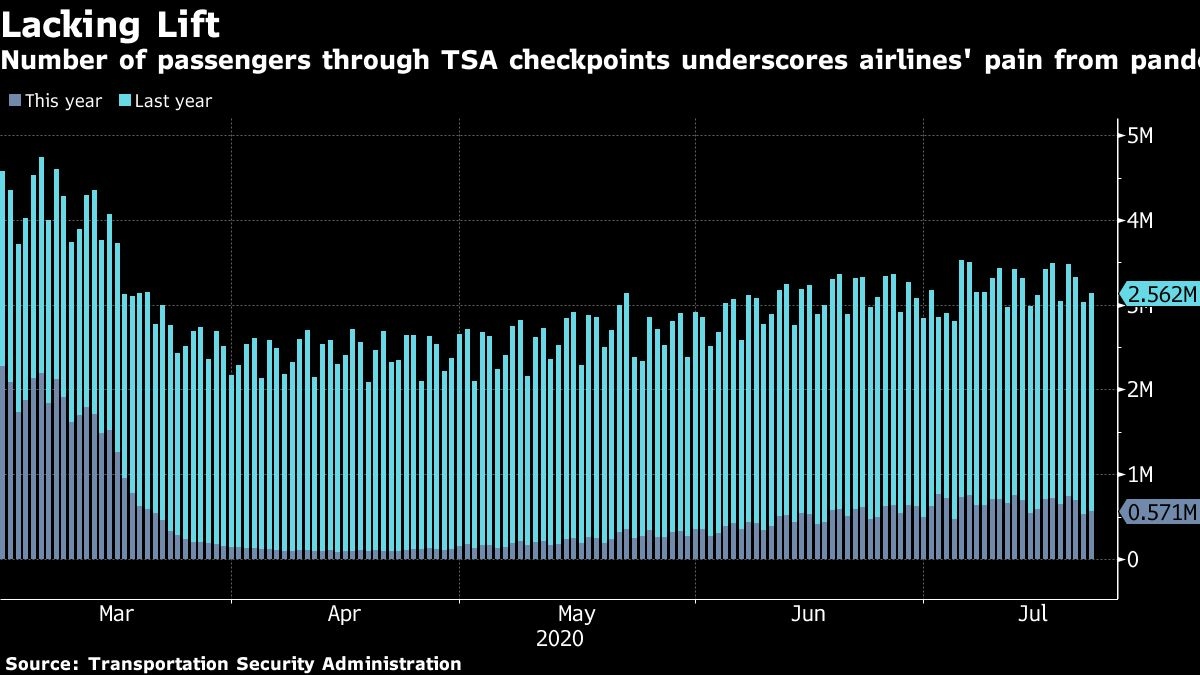 • A widely watched measure of consumer sentiment turned decidedly more pessimistic in July. Consumer spending accounts for about 70 per cent of the economy.

• Restaurant bookings have stopped rising nationwide amid virus fears, remaining at one-third of year-earlier levels, according to OpenTable data.

• U.S. employment dropped by 4.1 million from the first week to the second week of July, according to a Census Bureau survey.

“We are seeing — in the areas where Covid has come back in a significant way like California, Texas, Arizona — mobility data weaken, small business data shows some softening as well as consumer spending,” Bank of America Corp. chief U.S. economist Michelle Meyer said.

If there’s a bright side, “there hasn’t been a collapse by any means” — more of a “modest softening,” Meyer said. And if the reimposed social-distancing measures can help control the virus, “one would imagine that the mobility will pick up again and people will re-engage to some extent,” she said.

“We’re in an environment where it’s almost like we’re starting our business from scratch. We had very strong bookings in place for the third quarter, at the beginning of this month. Then over the last several weeks, with the spike in COVID-19 cases, we’ve seen the bookings slow down dramatically and we’ve also seen an increase in cancellations.”

“I don’t think any of us believe that we’re going to get even close to the old demand until there is a vaccine that’s widely spread.”

“Customers and businesses have adapted to a new environment. Some have reopened in U.S., some have also been re-closed or limited again. We expect start-stop to be the base case as we look ahead.”

Not everything is going in the wrong direction. Several gauges have shown expansion in regional manufacturing this month. Demand for home purchases has remained relatively strong, as measured by mortgage applications.

“The re-shutting of the economy is largely a retail phenomenon,” said Michael Englund of Action Economics LLC. “Production is continuing to accelerate.”

In addition, the decline in continuing jobless claims over the past few weeks indicated that July’s jobs report — due Aug. 7 — could very well show an increase in employment, though it’s far from guaranteed that gains would continue in August and beyond.

“The rate of separation remains extremely high, extraordinarily high,” said Michael Gapen, chief U.S. economist at Barclays Plc. “One report doesn’t make a trend, but that’s what we obviously would be concerned about.”