The U.S. economy’s growth rate is losing speed, prompting questions over how slow it can go and still avoid crashing into a recession.

Whereas expansion below two per cent used to almost guarantee the economy would subsequently contract, some economists now reckon the U.S. can wobble around 1 per cent -1.5 pr cent without falling over. 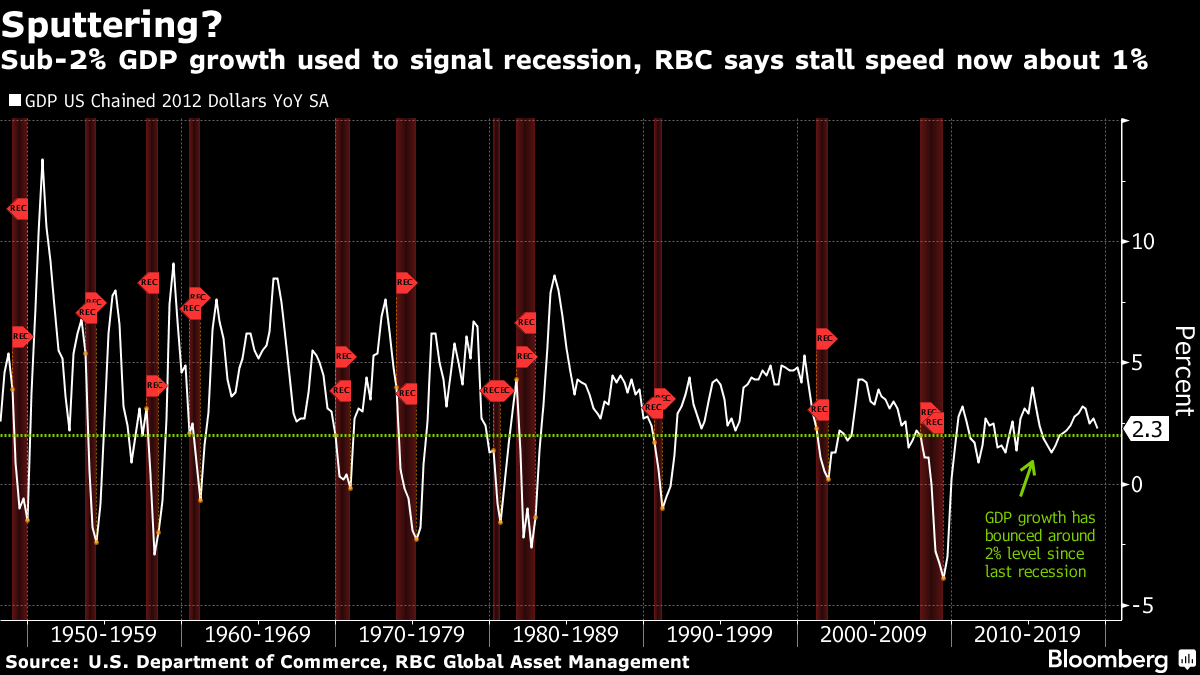 The decline in the economy’s so-called stall speed is a relief after data released Tuesday signaled the weakest manufacturing sector in a decade. It still leaves the Federal Reserve under pressure to cut interest rates and President Donald Trump facing challenges heading into next year’s election.

Whether the longest expansion in history remains intact may ultimately depend on whether consumers are able to maintain spending enough to offset the slump in manufacturing amid the U.S.-China trade war.

“Suddenly the idea of stall speed is much more important today than it has been for most of the expansion,” said Stephen Gallagher, chief U.S. economist at Societe Generale SA. “The economy is running on one engine, and that’s the consumer.”

At Commerzbank AG, currency strategist Ulrich Leuchtmann told clients in a report on Wednesday that “the fact that stall speed is becoming an issue of common interest” may undermine demand for U.S. assets.

Taking a page from aviation, in which the stall speed is the slowest a plane can fly while still maintaining a level flight, the economic equivalent is the point at which growth is no longer self-sustaining.

That happens when consumers and companies pull back in the face of the lackluster economic performance.

The outlook for growth has indeed softened, with the manufacturing sector already slipping into a recession during the first half of the year, capital investment weakening and job gains moderating. Analysts expect growth in gross domestic product to slow to 1.7 per cent next year.

In expansions dating back to the 1940s, real GDP growth below two per cent was almost always followed by a recession, according to Lascelles. Now, he and other economists expect the economy can avoid buckling at that pace. A reduced stall speed means growth can be slower and monthly payroll gains can be softer and still sustain the expansion.

The stall speed has largely declined because the potential growth rate of the economy has slowed.

The two concepts are closely tied. Potential growth is the pace at which the economy can expand without inflation heating up. Right now, the Fed sees potential growth at 1.9 per cent. Predictions by the Congressional Budget Office for the rate have also come down over time. It’s eased amid demographic changes like slower population growth and softer productivity gains. 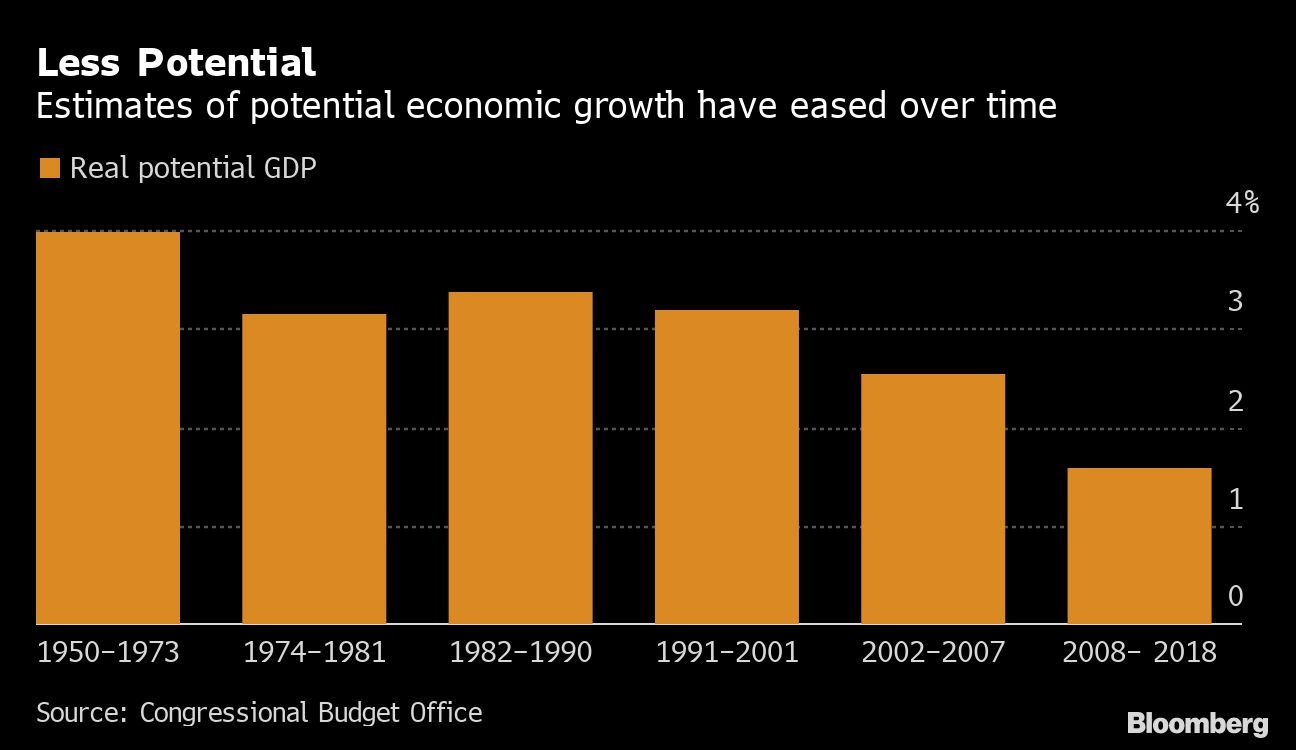 “The problem here is if potential growth is slowing, what constitutes a rapid expansion today is very different than what it looked like maybe 40 years ago,” said Michael Gapen, chief U.S. economist at Barclays Plc.

And the expansion has been lackluster. Since the end of the recession in 2009, GDP has increased about half as much on a percentage basis as it did during the 1991-2001 expansion, the nation’s second-longest. Wage growth has remained subdued and inflation has repeatedly missed the Fed’s 2% target.

“We expect stall speed for the economy to be in the vicinity of 1.4-1.5 per cent real GDP growth (in year-on-year terms). Below that, household income creation slows to such a pace that consumers are unable to shoulder the growth burden.”

Most economists predict the economy can stay above their self-defined stall speed level next year, but Joachim Fels and Andrew Balls of Pacific Investment Management Co. expect growth to slow to about one per cent in the first half of 2020.

“While a recession is not our base case, it doesn’t take much to tip over an economy that is moving along at stall speed,” Fels and Balls wrote in the report last week.

While a slower stall speed means the economy can expand at a more subdued pace without signaling imminent recession, the bad news is that it doesn’t mean the U.S. is less exposed to a downturn.

Lower potential growth “tells you that a shock that we may have experienced before the crisis which may not have tipped you into recession could certainly do so now,” said Matthew Luzzetti, chief U.S. economist at Deutsche Bank AG.

As economic growth withers, fiscal and monetary stimulus, provided that they are employed in a timely fashion, can give the economy much-needed lift. But policy makers at the Fed and in Congress have less room to keep the nation from hitting stall speed -- or possibly accelerating out of it.

“It raises the risk of the end of the economic cycle,” Gapen said. “We’ve done what we can do on the fiscal side. There’s limited space for monetary policy to react.”