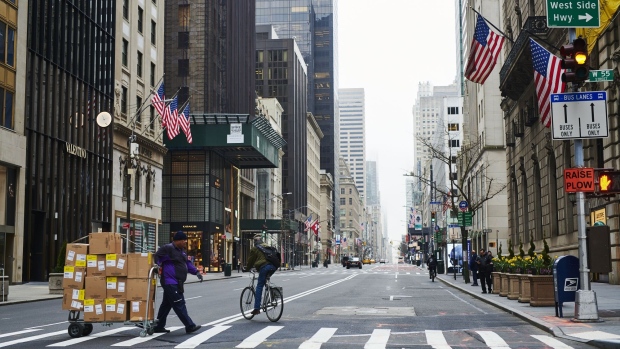 A worker pulls a trolley loaded with packages on 5th Avenue in New York, U.S., on Friday, March 20, 2020. Some retail segments, such as grocery chains and Walmart, may benefit from the coronavirus outbreak. But for a sector already battered by the shift to online retailing and other structural changes, the coronavirus only portends more pain. Photographer: Gabby Jones/Bloomberg , Bloomberg

U.S. retail sales and factory output registered the steepest declines on record in April, illustrating a recession so deep that it will likely take years to fully recover.

Revenue at retailers and restaurants fell 16.4 per cent from the prior month, almost double the 8.3 per cent drop in March which was previously the worst in data back to 1992, according to a Commerce Department report released Friday. That compared with the median projection for a 12 per cent decline.

A separate report from the Federal Reserve showed industrial production decreased 11.2 per cent last month, the steepest monthly drop in the 101-year history of the series. Manufacturing output plummeted by a record 13.7 per cent amid declines in all major industries, the Fed said.

“Activity was really suffering from the combination of lockdowns and fear,” said Gregory Daco, chief U.S. economist at Oxford Economics.

“Some of the most exposed sectors are, not surprisingly, the sectors that are dependent on consumer spending or on factory work.”

With the coronavirus pandemic keeping most Americans stuck at home and unemployment the highest since the Great Depression era, people sharply reduced their spending in the month. Friday’s figures show how the breadth of the damage extends from factory floors to households and suggest the economy has a deeper hole to climb out of than previously thought. Further store closures and bankruptcies across the nation risk exacerbating the situation.

One bright spot in Friday’s data was a surprise increase in consumer sentiment, which rose amid widespread virus-relief payments and discounts for big-ticket items. At the same time, pessimism deepened about the longer-term outlook for incomes and the economy.

“Combined with a spike in the household savings rate and deteriorating confidence that the crisis will be temporary, a heightened sense of thrift among consumers bodes poorly for prospects of a vigorous, consumer-driven rebound later this year.”

Businesses are equally downbeat about prospects, according to a survey by the Institute for Supply Management. Manufacturers and service providers expect 2020 revenue to decline more than 10 per cent on average, details of the group’s semi-annual forecast showed Friday. Employment and capital spending are seen weakening.

“With 15 of the 18 manufacturing sector industries -- including five of the six big industry sectors -- predicting revenue declines for 2020, panelists forecast that recovery will likely not occur until near the end of the year,” Tim Fiore, chair of the ISM manufacturing business survey committee, said in a statement.

The retail sales report, meantime, showed all but one of 13 major categories decreased, led by a 78.8 per cent drop at clothing stores and a 60.6 per cent decline at electronics and appliance outlets. The only category to record a gain was nonstore sales -- including online sellers such as Amazon.com -- which increased 8.4 per cent.

Receipts at food and beverage stores, which saw sales surge in March as Americans stocked up on essential goods, fell 13.1 per cent in April. Sales at restaurants and bars were down 29.5 per cent from the prior month, with receipts about half the level of April 2019.

A separate report Friday showed New York state manufacturing remains in distress, with a gauge of May factory activity shrinking at the second-fastest pace in records back to 2001. Other data showed U.S. job openings plunged in March to the lowest level since May 2017.

A sharp drop-off in consumer spending is one of the main drivers behind estimates for gross domestic product this quarter to post the sharpest drop in records dating back to 1947. With states starting to loosen some business curbs, spending will likely pick up in the coming months, though it could remain below pre-virus levels for some time.

The so-called “control group” subset of sales, which excludes food services, car dealers, building-materials stores and gasoline stations, fell 15.3 per cent from the prior month. In more normal times, the measure is viewed as a better gauge of underlying consumer demand, though that’s less the case now.