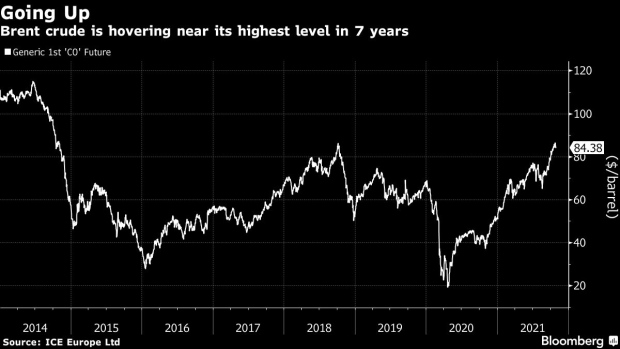 Oil storage tanks stand illuminated at night at the RN-Tuapsinsky refinery, operated by Rosneft Oil Co., in Tuapse, Russia, on Sunday, March 22, 2020. Oil resumed gains on signs that the world’s biggest producers are moving toward a deal to end their price war and cut output. Photographer: Andrey Rudakov/Bloomberg , Bloomberg

(Bloomberg) -- The U.S. is talking to other energy-consuming nations about how to press OPEC+ to boost output to address the current supply crunch, a senior U.S. official told reporters in Rome.

The leaders will also discuss how they might respond if the 23-nation cartel that includes Russia doesn’t take action, the official said, although he wouldn’t speculate on what those options might be.

More broadly, an intense campaign is being waged to persuade OPEC+ to speed up its output increases, Bloomberg reported earlier, citing multiple diplomats and industry insiders involved in the contacts.

The cartel meets virtually on Nov. 4 to review policy.