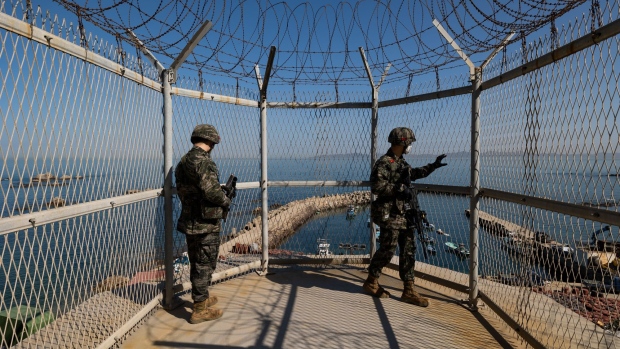 South Korean Marine Corps soldiers stand next to a razor wire fence at a military check point on Baengnyeong Island, Incheon, South Korea, on Tuesday, March 30, 2021. Ever since fighting ended in the Korean War nearly seven decades ago, Baengnyeong has been a key location for U.S. allies in Seoul to spy on North Korea. Yet now the island is on China's radar. Photographer: SeongJoon Cho/Bloomberg , Bloomberg

(Bloomberg) -- President Joe Biden’s envoy for North Korea reiterated the U.S. is ready for dialog without preconditions, urging the country to respond to its offers.

The U.S. hopes to keep cooperating with South Korea in seeking various ideas and initiatives, including the declaration of the end of the war on the Korean peninsula, Kim also said.

Last week, the U.S. condemned North Korea for firing a ballistic missile from a submarine. The latest launch follows a series of tests in September of weapons capable of delivering nuclear warheads to South Korea and Japan.