US stocks rallied Friday as sentiment improved after traders parsed comments from Federal Reserve officials who reiterated that the central bank needs to do more to curb the hottest inflation in 40 years.

While the S&P 500 rose on Friday, it still closed the week at its lowest since December 2020 as investors grappled with a flurry of data that intensified recession fears. The tech-heavy Nasdaq 100 surged. Friday also brought the quarterly event known as triple witching. The US$3.5 trillion options expiry has arrived with limited downside volatility so far. Treasury yields rose across the curve, with 10-year yields hovering around 3.2 per cent. The dollar snapped two days of losses.

Markets rounded off a week buffeted by interest-rate increases, including the Federal Reserve’s biggest move since 1994, a shock Swiss National Bank hike and the latest boost in UK borrowing costs. The rate hikes are draining liquidity, sparking losses in a range of assets. Traders are still assessing the path of rate hikes the Federal Reserve could take and the impact that would have on the economy.

“Coming off a painful week on Wall Street, investors are becoming optimistic that the Fed remains committed to bringing down inflation and that markets could be close to pricing in where the overnight rate will be at its peak next year,” said Edward Moya, senior market analyst at Oanda.​

Federal Reserve Chair Jerome Powell said, on Friday, that the central bank is “acutely focused” on returning inflation to 2 per cent and that another 75 basis-point hike or 50 basis-point move was likely at the July meeting. Federal Reserve Bank of Kansas City President Esther George said she opposed the Fed’s Wednesday decision because the move, combined with the shrinking of the central bank’s balance sheet, creates uncertainty about the outlook.

“I think that we need to work on the basis that the macroeconomic and investment environment will remain potentially very fragile,” said Christian Nolting, Deutsche Bank’s private bank global chief investment officer. “Recovery will not be simple and, even on the most optimistic assumptions -- for example, on Chinese economic reopening -- issues such as supply-chain disruption will take time to fix.”

US factory production data for May pointed at cooler demand as output unexpectedly declined. Meanwhile, industrial production for May rose, but below the estimate.

Global stocks are facing one of their worst weeks since pandemic-induced turmoil of 2020 and some investors aren’t sure that assets have sunk far enough to price in the tightening cycle.

“Near-term recession has become a foregone conclusion for many investors; the only questions now are its duration and the severity of its impact on earnings,” Wells Fargo’s Chris Harvey wrote in a note.

Compared with the last two bear markets that were also associated with runaway inflation, the current one, at six months, has a long way to go, Harvey said. The 1980-1982 downturn lasted just over 20 months, as did the one between 1973 and 1974. 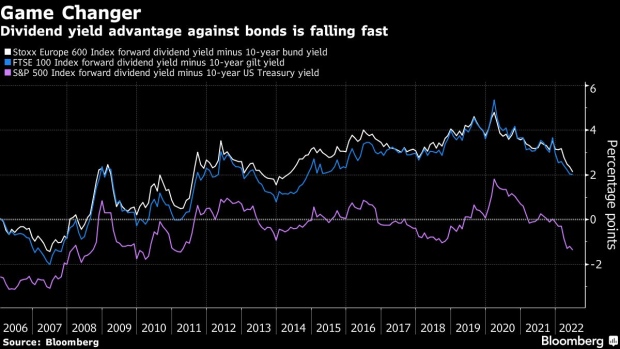 Bitcoin flirted with key US$20,000 level, after snapping its longest streak of losses in Bloomberg data going back to 2010 earlier on Friday. In a sign of deepening turmoil in the crypto community, Babel Finance became the second major digital-asset lender this week to freeze withdrawals, telling clients it is facing “unusual liquidity pressures” as it contends with recent market declines. Oil fell as traders weighed the prospect of slower economic growth against tight supplies.

“The market continues to vacillate on the narrative of the year, between monetary normalization due to inflation and monetary policy error: a source of sustained volatility for equity valuations,” said Florian Ielpo, head of macro at Lombard Odier Asset Management.

US stocks attracted US$14.8 billion in the week to June 15, their sixth consecutive week of additions, according to Bank of America Corp., citing EPFR Global data. In total, US$16.6 billion flowed into equities globally in the period, while bonds had the largest redemptions since April 2020 and just over US$50 billion exited cash, the data showed. In a separate report, BofA raised European stocks to neutral from negative, saying the impact of economic news is now priced in.