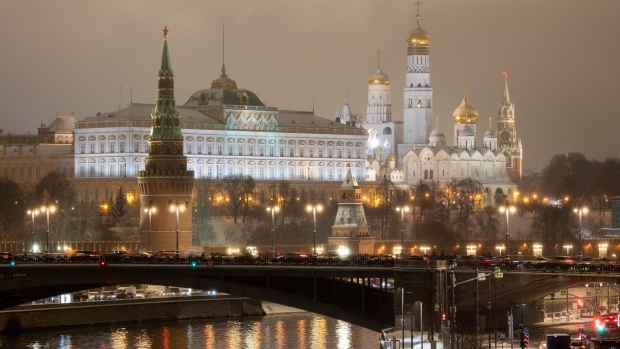 The Kremlin in Moscow, Russia, on Tuesday, Dec. 7, 2021. Russian markets brushed off reports that the U.S. and its allies are considering sanctions targeting the country’s banking sector should President Vladimir Putin invade Ukraine. , Bloomberg

(Bloomberg) -- The U.S. and the European Union are zeroing in on a package of sanctions against Russia should President Vladimir Putin decide to invade Ukraine, according to people familiar with the matter and documents seen by Bloomberg.

The measures would broadly fall into several categories including: restrictions on the refinancing of Russian sovereign debt, financial sanctions, and the singling out of individuals and entities close to the Kremlin. Western allies are also working on a series of trade-related measures covering key goods and sectors.

The Biden administration and its European counterparts have been coordinating closely over several weeks to pin down the details of the package, which is now close to being finalized, the people said. The measures go beyond punishments inflicted on Moscow after the Russian annexation of Crimea in 2014.

Although there is broad agreement among allies that the sanctions would be implemented in the event of an invasion, there is not yet a joint agreement on other potential trigger points and the consequence of aggressive or destabilizing acts that don’t amount to a further incursion by Russian forces into Ukraine that don’t amount to a full invasion by Russian forces. The Kremlin has backed separatists in eastern Ukraine and the U.S. and others have warned Russia might also opt for a limited incursion into those areas.

A spokeswoman for the U.S. National Security Council didn’t immediately comment on Friday evening. Putin has said he has no plans to invade.

The financial sanctions would see some of Russia’s biggest banks prohibited from some interbank operations in U.S. dollars, such as clearing.

Additional financial restrictions could see a select group of banks and state-linked entities hampered by asset freezes, as well as limits introduced on transactions, borrowing and access to capital markets. Domestic-facing banks that have been used in the past to try and circumvent sanctions are also likely to be hit.

The U.S. and its European allies have been trying to focus the package in a way that minimizes unintended negative consequences and any collateral damage on their own economies and companies.

The financial measures could include some caveats. For instance, Germany and other major Western European nations have sought exemptions for the energy sector from a potential clearing ban, protections for some existing contracts as well as so-called grandfathering and wind-down periods.

The U.S. and its allies are also working with other nations to diversify European gas supplies to avoid supply shocks should Russia retaliate to any sanctions by cutting off gas flows to Europe, President Joe Biden and European Commission President Ursula von der Leyen said in a statement on Friday.

Cutting Russia out of the Swift international payments system is technically still on the table officials say, but they acknowledge that it would be a highly problematic move as it would cause havoc across western economies too, and a number of European governments have indicated that it is a no-go for them.

Measures are also being drafted to target Russian oligarchs and entities, including state-owned enterprises, with combinations of travel and trade bans and asset freezes. Work on those lists is proceeding, the people said.

In addition to the sanctions, the U.S. and the EU will implement a series of commercial and trade-related restrictions.

These could include export controls and bans in technology and sensitive industries, such as semi-conductors, aerospace, defense, cyber surveillance technologies, luxury goods and equipment used in the oil industry. Restrictions could also be imposed on goods used for both civilian and military purposes, such as in quantum computing.

Limits could be introduced in the imports of select metals, such as steel and iron, and chemicals, the people said. Work on finalizing the trade measures is ongoing, the people added.

In addition to any joint transatlantic package, there is the expectation that Germany would prevent the Nord Stream 2 gas pipeline from operating in the event of an invasion.