Sales of previously owned U.S. homes fell for a fourth straight month in May as higher home prices and lean inventories weighed on home buying.

Contract closings decreased 0.9 per cent from the prior month to an annualized 5.8 million, according to data out Tuesday from the National Association of Realtors. The median forecast in a Bloomberg survey of economists called for a 5.73 million rate in May. 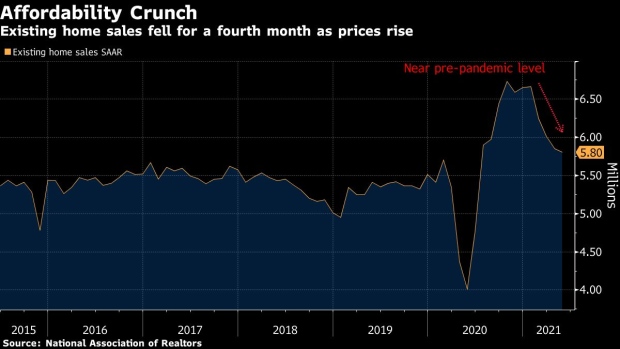 Home prices will likely remain elevated for some time as builders struggle to replace the deficit in existing homes with new builds. They cite high materials prices, supply shortages and a limited number of skilled workers as ongoing challenges. The median selling price rose 23.6 per cent from a year ago to a record US$350,300 in May.

“Lack of inventory continues to be the overwhelming factor holding back home sales, but falling affordability is simply squeezing some first-time buyers out of the market,” Lawrence Yun, NAR’s chief economist, said in a statement.

There were 1.23 million homes for sale last month, up 7 per cent from the prior month, though well-below levels of a year ago. At the current pace, it would take 2.5 months to sell all the homes on the market. Realtors see anything below five months of supply as a sign of a tight market.

“If prices were to decline, there’s an army of potential homebuyers seeing it as a second-chance opportunity,” Yun said on a call with reporters.

Sales of previously owned single-family homes declined 1 per cent in May to a 5.08 million pace

Three of four regions in the U.S. posted sales declines last month, while sales rose in the Midwest

Existing-home sales account for about 90 per cent of U.S. housing and are calculated when a contract closes. New-home sales, which make up the remainder, are based on contract signings and will be released Wednesday