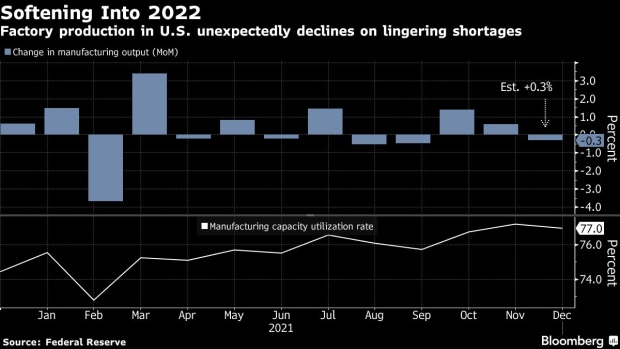 The median estimate in a Bloomberg survey of economists called for a 0.3% monthly advance in factory output and a 0.2% increase in total industrial production.

In the year through December, factory production was up 3.5% while total industrial output climbed 3.7%.

The figures underscore the long, slow path to normalizing the mismatch in supply and demand in the goods sector. The omicron variant is just the latest hurdle, as factory floor managers navigate the fallout of the spike in cases on workers and production schedules. Challenges related to transportation networks and various materials shortages are also hampering efforts to boost supply.

Even so, looking ahead, lean inventories, elevated order backlogs and sustained growth in consumer and business demand are poised to offer a tailwind to production this year.

The Fed’s report showed capacity utilization at factories fell in December to 77%, the first decline in three months. Total industrial capacity also eased to to 76.5%.

“I suspect that some industries may have been forced to slow down activity in the second half of the month due to omicron-driven absences,” Stephen Stanley, chief economist at Amherst Pierpont Securities LLC, said in a note. “In any case, manufacturers will look to get back up to full speed as soon as they can in light of robust demand for goods from consumers and businesses.”

Recent factory surveys have pointed to some alleviation in stressed supply networks, with measures of supplier delivery times improving. Institute for Supply Management data earlier this month showed a gauge of manufacturing delivery times dropped to its lowest level in more than a year.

Other data out Friday illustrated how the impact of fragile supply chains has driven up prices. Import prices climbed 6.8% in December from a year earlier, according to the Labor Department.

(Adds data on import prices from a separate report.)