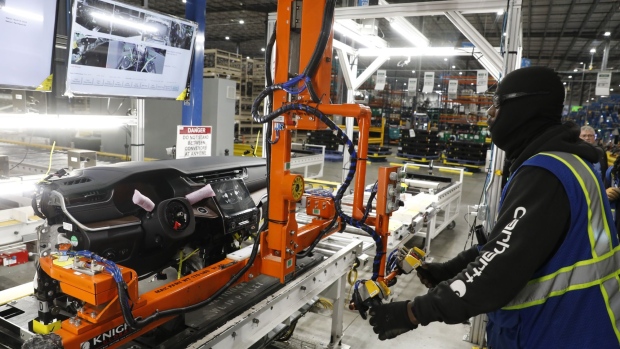 (Bloomberg) -- U.S. factory production rose at a solid pace for a third month in April, pointing to ongoing strength in the sector.

Median forecasts in a Bloomberg survey of economists called for a 0.4% advance in factory output and a 0.5% gain in industrial production.

Another robust month of factory output illustrates how an easing of capacity constraints tied to labor and materials is providing producers greater wherewithal to meet resilient demand for business equipment and some household goods. At the same time, changing consumption patterns, high inflation and rising interest rates risk tempering manufacturing.

The rise in April manufacturing output was broad, including gains in production of metals, machinery, motor vehicles and food, the Fed’s report showed.

At the same time, recent survey-based data paint a bleaker picture. The Institute for Supply Management’s new orders gauge pulled back in April to its lowest level since 2020. Figures out Monday showed manufacturing activity in New York state contracted in May for the second time in three months, as orders and shipments plunged.