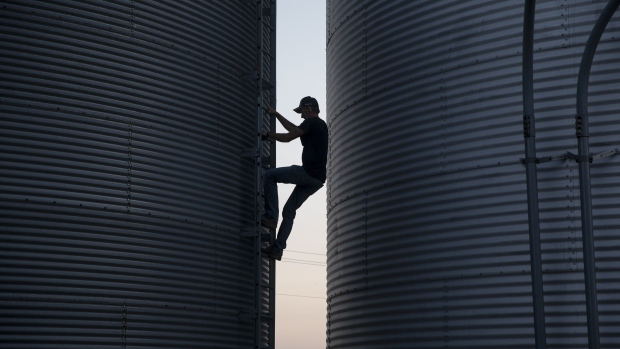 A farm worker climbs down a grain bin after inspecting its remaining capacity during a soybean harvest in Wyanet, Illinois, U.S., on Friday, Sept. 25, 2020. Soybean futures fell to the lowest in almost two weeks in Chicago, extending a decline below $10 a bushel, as U.S. harvesting progresses. Corn prices also retreated. , Bloomberg

(Bloomberg) -- A shaken U.S. agriculture industry already “stressed” by a profitability squeeze in a pandemic year may see little relief in 2021, according to a survey of industry lenders.

Agricultural lenders reported that “just under” 51% of their borrowers were profitable this year and about half those lenders don’t expect borrower profitability to improve next year, according to the Fall 2020 Agricultural Lender Survey from the American Bankers Association and Federal Agricultural Mortgage Corporation, also known as Farmer Mac. That’s down from 2019, when lenders said about 57% of borrowers were profitable.

Almost a quarter of lenders expect bankruptcies to increase this year, similar to 2019, though 57% expect a rise next year due to a marked increase in strain. Such a view “may be due to expectations that the damages of 2020 will take time to lead to bankruptcies, uncertainty in government program support, and expectations for weak markets in 2021,” the report said.

Lender expectations for retirements and voluntary farm exits didn’t change in 2020 from the year earlier, according to the survey of nearly 500 agricultural lenders done in August. Overall, lenders are most focused on liquidity issues for producers, with 51% calling this their main concern.

Grains, dairy and beef cattle topped the list of lender concerns by commodity sector, the report said. Worries about beef rose to 54% from 44%, and hogs to 50% from 29%, as the pandemic’s effect on animal proteins “worked their way through to lender sentiment.”

“Trade disruptions and changes in how Americans eat will continue to influence lender concern over the near term,” the report said.

Grain was the top concern, at 71%, though this was similar to year-ago levels. Nervousness about dairy ranked second at about 63%, down from 79% last year. Some producers are actively seeking new sources of income, with 43% of lenders saying they have been asked about financing hemp crops, and about a third reporting inquiries about financing for renewable energy projects.

About 55% of agricultural bankers throughout the district -- which includes Kansas, Colorado, Nebraska, Oklahoma, Wyoming, and parts of Missouri and New Mexico -- reported lower incomes in the third quarter than a year ago. That compares with 75% in the second quarter, according to the Kansas City Fed.

Higher agriculture commodity prices late in the quarter, along with direct government payments, “led to more optimistic expectations about changes in farm income through the end of the year,” the bank said in its Nov. 12 report.

Net farm income is estimated to reach $102.7 billion, its highest since 2013, according to a September forecast by the U.S. Department of Agriculture. The projections, though, showed the sector is increasingly dependent on federal aid, with much of it from one-time payments tied to the pandemic and trade disruptions.