U.S. Fed can raise rate quickly to curb inflation but it might not be pleasant: Fed advisor

Federal Reserve officials signaled that the pace of the U.S. economic recovery from the pandemic is bringing forward their expectations for how quickly they will reduce policy support.

Chair Jerome Powell told a press conference Wednesday that officials had begun a discussion about scaling back bond purchases after releasing forecasts that show they anticipate two interest-rate increases by the end of 2023, projecting a faster-than-anticipated pace of tightening

“The economy has clearly made progress,” Powell said, noting that policy makers had debated how far the economy has traveled toward their threshold for scaling back US$120 billion in monthly bond purchases. “While reaching the standard substantial further progress is still a ways off, participants expect that progress will continue,” he said.

“You can think of this meeting as the talking-about-talking-about meeting, if you like,” he added following a two-day gathering of the Federal Open Market Committee.

The central bank held the target range for its benchmark policy rate unchanged at zero to 0.25 per cent -- where it’s been since March 2020. The FOMC vote was unanimous.

“It’s a hawkish surprise,” said Thomas Costerg, senior U.S. economist at Pictet Wealth Management, referring to the rate projections. “We are looking at a Fed that seems positively surprised by the speed of vaccinations and the ongoing withdrawal of social-distancing measures.”

The quarterly projections showed 13 of 18 officials favored at least one rate increase by the end of 2023, versus seven in March. Eleven officials saw at least two hikes by the end of that year. In addition, seven of them saw a move as early as 2022, up from four.

“The dots should be taken with a big grain of salt,” Powell said, referring to the interest-rate forecasts. He cautioned that discussions about raising rates would be “highly premature.”

The Fed marked up its inflation forecasts through the end of 2023. Officials see their preferred measure of price pressures rising 3.4 per cent in 2021 compared with a March projection of 2.4 per cent. The 2022 forecast rose to 2.1 per cent from 2 per cent, and the 2023 estimate was raised to 2.2 per cent from 2.1 per cent.

Consumer-price pressures have proven hotter than expected over the last two months. Labor Department figures showed a 0.8 per cent jump in prices in April and a 0.6 per cent rise in May, marking the two biggest monthly increases since 2009. 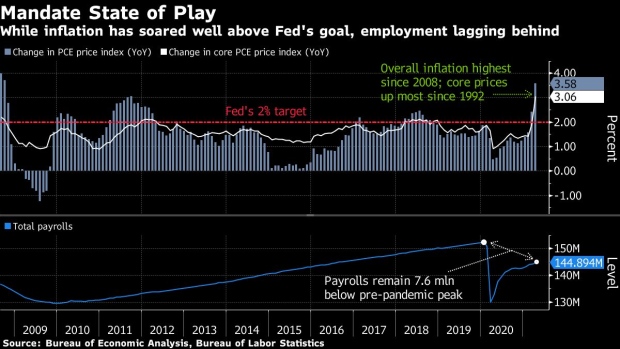 “As the reopening continues, shifts in demand can be large and rapid, and bottlenecks, hiring difficulties and other constraints could continue to limit how quickly supply can adjust -- raising the possibility that inflation could turn out to be higher and more persistent than we expect,” Powell said.

Labor Department reports on employment published since the last gathering of the FOMC in late April, on the other hand, have disappointed relative to forecasters’ expectations. The U.S. unemployment rate was still elevated at 5.8 per cent in May, with total employment still millions of jobs below pre-pandemic levels.

Still, the FOMC median projection for unemployment in the fourth quarter of 2021 was unchanged at 4.5 per cent, and the median estimate for the same quarter a year later was marked down to 3.8 per cent from 3.9 per cent. The 2023 forecast was held at 3.5 per cent.

The U.S. economic recovery is gathering strength as business restrictions lift and social activity increases across the country. Robust demand from consumers and businesses alike has outstripped capacity, leading to bottlenecks in the supply chain, longer lead times and higher prices.

Fed officials have said such “fits and starts” are to be expected given the unprecedented nature of the pandemic and expressed optimism about the outlook for the second half of the year as more Americans get vaccinated.

The FOMC raised its projections for economic growth. Gross domestic product was seen expanding 7 per cent this year, up from a prior projection of 6.5 per cent. It maintained the 2022 expansion forecast at 3.3 per cent and raised the 2023 estimate to 2.4 per cent from March’s 2.2 per cent.