U.S. Fed might want to learn from the way the BoC is communicating: Macro strategist

Federal Reserve Chair Jerome Powell and his colleagues upgraded their assessment of the U.S. economy but said they were not yet ready to consider scaling back pandemic support.

“Amid progress on vaccinations and strong policy support, indicators of economic activity and employment have strengthened,” the Federal Open Market Committee said in a statement Wednesday after holding its key interest rate near zero and maintaining a US$120 billion monthly pace of asset purchases.

Marking a clear improvement since COVID-19 took hold more than a year ago, the Fed said that “risks to the economic outlook remain,” softening previous language that referred to the virus posing “considerable risks.” The statement also noted that sectors hit hardest by the COVID-19 pandemic had “shown improvement.” And on the risk of prices rising, policy makers said: “Inflation has risen, largely reflecting transitory factors.” 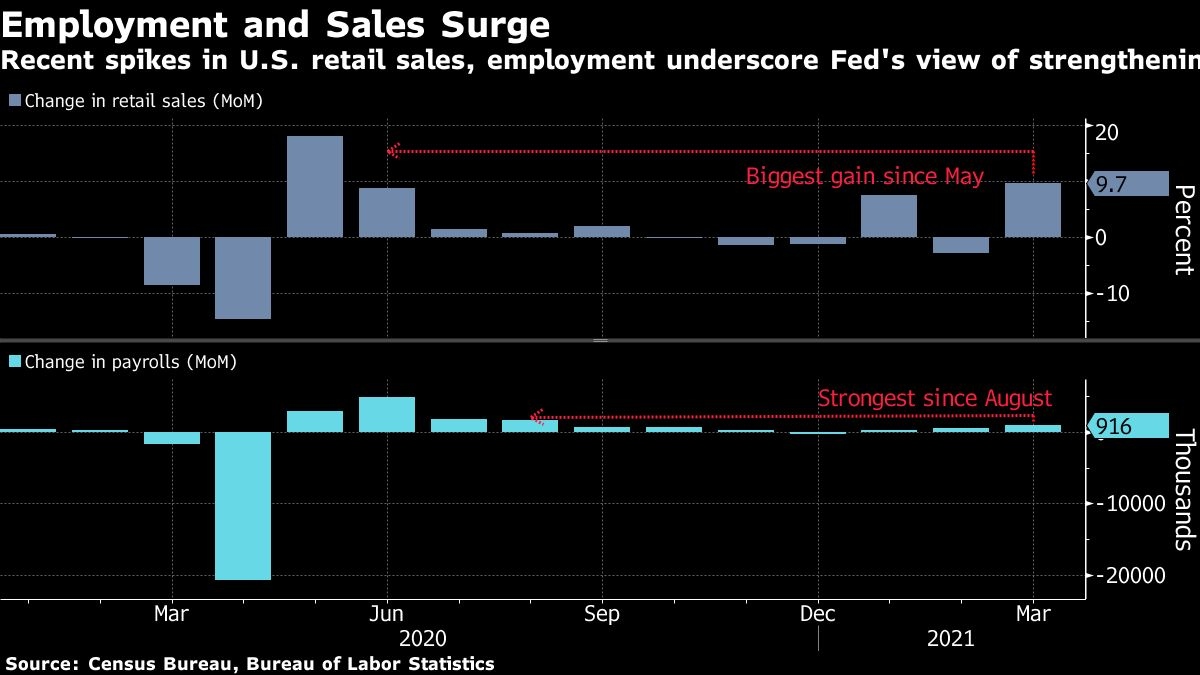 The yield on 10-year Treasuries retreated to be slightly lower on the day as Powell spoke to reporters after briefly touching a fresh session high when the decision was announced and the Bloomberg dollar index slipped to a two-month low. The pricing of Fed policy tightening in the coming years was pared slightly, while the S&P 500 Index reversed an earlier gain to trade little changed.

Powell and his colleagues met amid growing optimism for the U.S. recovery, helped by widening vaccinations and aggressive monetary and fiscal support. President Joe Biden will unveil a sweeping US$1.8 trillion plan to expand educational opportunities and child care when he addresses a joint session of Congress later on Wednesday, while highlighting his US$2.25 trillion infrastructure proposal and the US$1.9 trillion pandemic relief package he signed into law last month.

At the same time, a rise in coronavirus cases in some regions around the world casts a shadow over global growth prospects, giving policy makers reason to remain patient on withdrawing support. Fed officials have also been largely dismissive of inflation risks for the time being, saying a jump in consumer prices last month was distorted by a pandemic-related decline in prices in March 2020.

Powell told a post-meeting press conference that the recovery has been faster than expected but “it remains uneven and far from complete” and the economy “is a long way from our goals.”

U.S. central bankers repeated they would not change the pace of bond buying until “substantial further progress” is made on their employment and inflation goals. The target range of the benchmark federal funds rate was kept at zero to 0.25 per cent, where it’s been since March 2020.

Powell said that it was not yet time to discuss scaling back asset purchases and “it will take some time before we see substantial further progress.”

Forecasters surveyed by Bloomberg expect the U.S. economy this year to expand at the fastest pace in more than three decades, with the Fed expected to announce in late 2021 that it will start slowing the pace of asset purchases.

U.S. central bankers have backed expansive fiscal policy, noting that millions of Americans are still unemployed and run the risk of remaining jobless for the long-term if they don’t find work soon.

Since their March meeting, officials have seen the S&P 500 stock index continue to rally while yields on the government 10-year note, after a sharp move up in the first quarter, have traded in a range around 1.6 per cent. The labor market in March added the most jobs in seven months as improvements across most industries boosted nonfarm payrolls by 916,000.

Officials have also said policy changes will be based on outcomes, not a forecast, meaning a string of powerful monthly labor market gains would be needed to merit “substantial further progress.”