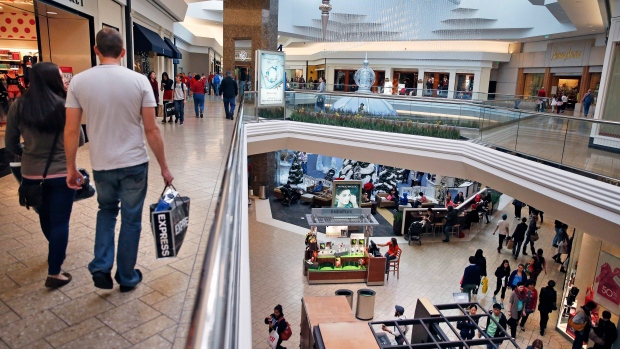 In this Nov. 29, 2013 file photo, shoppers walk through Cherry Creek Mall, in Denver. , The Canadian Press

But consumer spending, which makes up about two-thirds of the economy, was revised down to a 1.7 per cent increase from 1.8 per cent, also matching forecasts. Nonresidential fixed investment was revised lower to a 2.3 per cent drop, representing the third straight decrease and matching the biggest decline since 2015.

The report suggests the record-long U.S. expansion is more vulnerable to weakening than previously thought, and it may remain below President Donald Trump's target of three per cent growth as he seeks re-election. Global stocks have been walloped this week and Treasury yields have declined to record lows as the coronavirus spreads and investors fret about its impact on world commerce.

Earlier this month, economists had forecast that U.S. growth would slow to 1.5 per cent in the first quarter, amid weaker gains in government spending and only a slight increase in private investment. The record-long expansion is reliant on consumers continuing to open their wallets, particularly as businesses already whipsawed by the U.S.-China trade war start to contend with the coronavirus.

While most U.S. data have yet to reflect an impact from the virus, some indicators point to a potential hit to GDP: An IHS Markit output gauge for February fell to the lowest since 2013, led by concern at factories and service providers about lower new orders and demand, and severed supply chains.

Another data set from the Commerce Department on Thursday was brighter. Orders for commercial equipment excluding aircraft -- a proxy for business investment -- rose 1.1 per cent in January after an upwardly revised 0.5 per cent decrease. Even so, the coronavirus will test demand as well as supply chains.

A key measure of underlying demand -- final sales to domestic purchasers -- rose an annualized 1.5 per cent in the fourth quarter, revised from an initially reported 1.6 per cent and the weakest in a year.

A separate report from the Labor Department Thursday showed filings for unemployment benefits rose for a third week, though they remain low by historical standards. Jobless claims increased to 219,000 in the week ended Feb. 22, above economist forecasts. The four-week average, a less-volatile measure, edged up to 209,750.

The fourth-quarter GDP figures will be revised for a third and final time in March as additional data are compiled. GDP for the January-to-March period will be released in April.