U.S. stocks turned higher in the last hour of trading to close at another record, while the rally in bond markets lost steam as investors prepared for a key Federal Reserve meeting later in the week. Oil touched the highest in more than two years.

The information technology and communication services sectors pushed the S&P 500 to an all-time high even as three stocks fell for every one that rose. Financials dropped as JPMorgan Chase Chief Executive Officer Jamie Dimon suggested Wall Street’s pandemic-era trading boom could be drawing to a close. The Treasury 10-year yield rose to 1.50 per cent after hitting three-month lows on Thursday amid the biggest weekly slide since December.

Investors are on the lookout for signals from the Fed about a timetable for scaling back emergency monetary stimulus. Expectations are that the central bank will reaffirm the pace of bond purchases this week, even if it delivers projections for interest-rate liftoff in 2023, according to economists surveyed by Bloomberg. The decision is due Wednesday.

“We’re in a tug-of-war between the understanding that we’re having great economic growth and great earnings growth juxtaposed with the fact that we need to get our head wrapped around what inflation looks like and what it will mean both to profit margins and to the Fed,” said Art Hogan, chief strategist at National Securities. 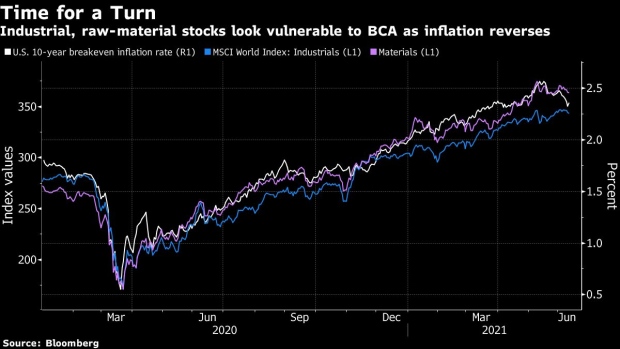 With anxiety about an imminent taper fading, bond yields have fallen to the bottom of recent trading ranges, providing a green light for risk-on sentiment that may last until at least August, according to Mizuho International Plc strategists.

“The overarching theme should be of an environment for investors to put cash to work,” Mizuho’s head of multi-asset strategy Peter Chatwell and colleagues wrote in a note to clients. “With this backdrop most asset classes should be able to at least hold ground, if not rally. We doubt any major change in Fed rhetoric will materialize before” the Jackson Hole symposium in August.

Oil was little changed after three weekly gains on optimism that economic reopenings will boost summer demand in the U.S. and Europe. Hedge funds boosted net-bullish positions to a nearly three-year high, according to the latest Commodity Futures Trading Commission data.

Bitcoin continued to whipsaw investors, climbing above US$40,000 after Paul Tudor Jones reiterated his support, only to erase most of its gains later. It had rose over the weekend after Elon Musk said Tesla would resume transactions with the cryptocurrency when mining it is done with more clean energy. Barry Silbert said later that the majority of cryptocurrencies are overpriced. Not just the majority, but 99 per cent of them. Silbert is the founder and chief executive officer of Digital Currency Group, the crypto powerhouse behind the Grayscale Bitcoin Trust among other things.

The dollar was steady in the wake of a Group-of-Seven leadership meeting that emphasized unity.