Transition from the summer of indigestion to the year-end opportunity needed a catalyst: Tony Dwyer

As Treasury yields pushed higher after a hawkish tilt from the Federal Reserve last week, some of the world’s largest technology companies continued to sell off.

A slide in bonds sent the rate on the benchmark 10-year note briefly above 1.5 per cent -- a level not seen since June. That’s prompted the tech-heavy Nasdaq 100 to underperform major equity benchmarks. Meantime, economically sensitive companies -- like energy, financial and smaller firms -- advanced.

Traders pulled forward wagers on a rate hike after Fed Chair Jerome Powell said the central bank could start tapering its asset purchases in November, while officials updated their forecasts -- with half of them seeing tightening by the end of 2022. A spike in Treasury yields has added to concerns about lofty equity valuations, particularly in the tech industry, which has powered the bull-market rally.

“Yields are rising sharply, reflecting investors’ expectations about monetary tightening amid surging inflationary pressures,” said Fawad Razaqzada, an analyst at ThinkMarkets. “If yields climb higher, this could weigh especially on the overstretched growth stocks in the technology sector, which have low dividend yields.” 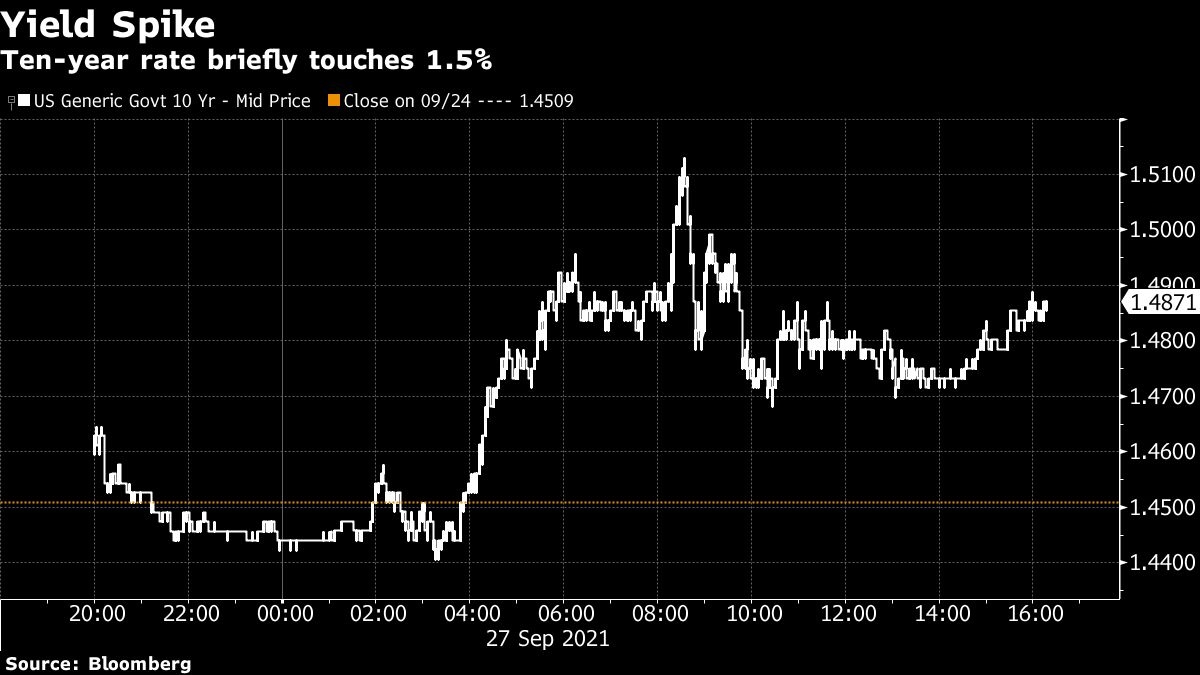 For Razaqzada, investors might prefer the relative safety of government debt and fixed-coupon payments -- rather than buying severely overvalued stocks -- just as the Fed starts to reduce the pace of its stimulus program.

Fed Governor Lael Brainard said the labor market may soon meet her yardstick for scaling back asset purchases, while the COVID-19 delta variant could raise upside risks for inflation. New York Fed President John Williams noted that moderating bond-buying may soon be warranted, and his Chicago counterpart Charles Evans said he sees “a first move” on raising rates in 2023.

Elsewhere, Brent closed at the highest since 2018 amid signs of a global energy crunch. While the benchmark met some resistance as it neared the US$80-a-barrel level, Goldman Sachs Group Inc. said it could hit US$90 by year-end as the market is in a bigger deficit than many realize.