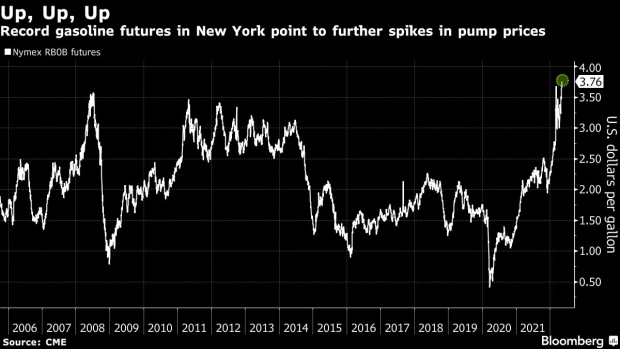 (Bloomberg) -- Gasoline futures in New York settled at a record high on Friday, three weeks before the start of the U.S. summer driving season.

At $3.76 a gallon, the futures are at their highest level in data going back 1986. Moves in futures prices typically foreshadow those in pump prices, which are approaching the record set in early March, when U.S. banned Russian oil imports after it invaded Ukraine.

Demand for fuel this summer is expected to exceed last year’s levels while supplies have fallen below pre-pandemic norms -- a combination that could send prices even higher this summer. Costly gasoline is a key driver of inflation, squeezing consumers already faced with rising costs for housing and food. Efforts from the Biden administration to tame pump prices, including releasing oil from the country’s emergency reserves and allowing higher ethanol-blend fuel, have failed to halt gasoline’s upward trajectory.

High gasoline prices are “a direct drain” on consumers’ resources, said John Kilduff, co-founder of Again Capital LLC, who blames the war for the spike. “The embargo of Russian oil and products has created a potential chasm that we can’t overcome,” Kilduff said in a phone interview.

Despite the steep prices a the pump, there is still enough pent-up demand from the past two years that will get drivers out onto the road this summer, according to Devin Gladden, a spokesperson for auto club AAA.