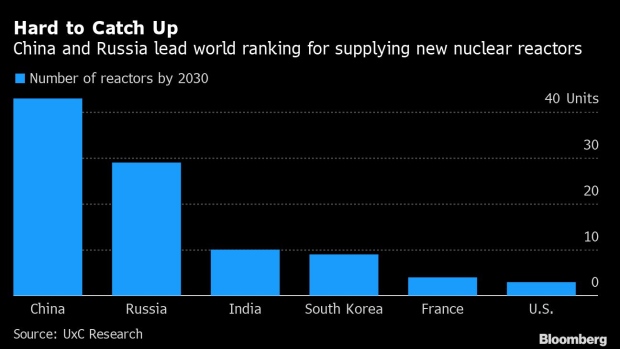 (Bloomberg) -- The former Cold War frontier of eastern Europe is becoming a battleground in the $500 billion business of building nuclear power plants.

Four months after lifting a prohibition on financing nuclear-energy deals overseas, the U.S. is finding an opening for companies such as General Electric Co., Westinghouse Electric Co. and Bechtel Group Inc.

In the span of a few weeks, the U.S. signed a memorandum with Romania for the financing of a new reactor and other accords with Poland as well as Bulgaria, which plans to revive an older reactor project.

The plan to win business for U.S. companies in this geopolitically key market started under Donald Trump is poised to survive the transition to a new U.S. administration under President-elect Joe Biden. That may nudge eastern European partners to move forward with stalled nuclear projects.

Greater access to financing may be the chief advantage on the American side as it pushes back against Russian and Chinese interests in the region.

“The projects in countries such as Romania, Bulgaria and Poland could be accelerated if the U.S. helps them come up with funding sources at competitive costs and, eventually, without the need for state aid or guarantees,” said Razvan Nicolescu, a Bucharest-based partner at Deloitte specializing in the energy industry.

Eastern European nations, which are dependent on fossil fuels from Russia and their own coal deposits, have even more reasons than others to seek nuclear options. Being subject to stringent European Union emissions standards also creates additional incentives.

The recent change in regulation is allowing the U.S. to compete for a larger share of the market, whose value it estimates at $500 billion-$740 billion over the next 10 years.

Westinghouse, which was one of the leading nuclear industry suppliers in the U.S., went bankrupt in 2017 as it faced billions in potential liabilities related to domestic projects in Georgia and South Carolina. After the South Carolina project was canceled in 2017, the two at Southern Co.’s Plant Vogtle remained the only reactors under construction in the world using Westinghouse’s flagship AP1000 technology, though that is also behind schedule and over budget.

Political rhetoric may prevail over actual investment decisions, said Martin Vladimirov, an analyst at the Sofia-based Center for the Study of Democracy.

“While the U.S. seeks to counter Russian and Chinese economic interference, those projects may not follow the market logic and will need significant state support,” Vladimirov said.

Russia doesn’t see current U.S. nuclear deals in Europe as a threat to its flagship Rosatom Corp. because the U.S. companies don’t have the bandwidth to build new plants now, a government official close to Russia’s nuclear industry said. The U.S. projects in Europe will likely be limited to servicing agreements, the official added, asking for anonymity as they’re not authorized to speak publicly.

State-owned Rosatom itself also played down the risk from increased competition, saying there’s room for many projects in the region.

“We believe that the U.S. nuclear sector has a great potential,” Rosatom said. “The most important thing now for the U.S. vendors is to grow skills by building more in the markets where they have presence and experience.”

Romania’s need to refurbish an existing reactor makes it the most likely candidate to tap U.S. funding or start work with backing from the U.S., Canada and France. There are bigger doubts over the economics and political will behind the nuclear push announced by Poland and Bulgaria.

Some have stuck by Russia as their main technological and financing partner, such as Hungary for its 10 billion-euro ($12 billion) nuclear expansion deal, though GE will get a chance to supply turbines there.

Others have turned away from the long-standing deals with Russia and rebuffed newer attempts by China to step in as financier and supplier.

Funding will be the key determinant whether these projects can get off the ground, according to Bloomberg Intelligence analyst Elchin Mammadov.

“It’s a very risky and expensive venture that is unlikely to be funded by anyone but the state,” Mammadov said.

Even with state backing, most of the projects flagged across eastern Europe may face years of delay and many may be eventually abandoned.

Russia and China have an edge because they offer package deals. The U.S. is “entirely absent” from the global new build reactor market, the U.S. Energy Department said in an April report.

The U.S. has “lost its competitive global position as the world leader in nuclear energy,” the American department concluded.