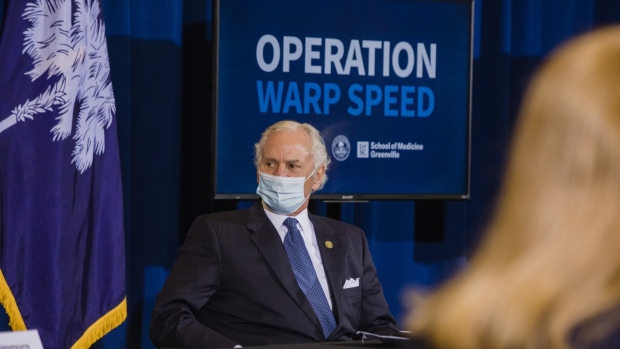 (Bloomberg) -- Charged with leading the nation’s vaccine rollout, a majority of U.S. governors have yet to get the shots themselves.

Nine Republican and nine Democratic governors have received at least one vaccine dose, according to a Bloomberg News tally as of Feb. 22. That includes Colorado’s Jared Polis, 45, and Mississippi’s Tate Reeves, 46, who said they were trying to encourage others to follow in a bid to combat high hesitancy rates. At least 28 governors have held off, saying they plan to wait to avoid the appearance of using the power of their office to cut the line.

State leaders face a balancing act as frustrated residents encounter jammed phone lines and malfunctioning websites while trying to get appointments in a rollout where demand far exceeds supply. At the same time, they want to set an example. There’s a precedent among government and public health leaders to get vaccines ahead of the general public to help demonstrate the safety and efficacy of the shot, said Marissa Levine, a public health professor at the University of South Florida who previously was Virginia’s state health commissioner.

“Given the general concerns by some about safety of the current vaccines, this is probably a good practice,” she said.

Reeves, a Republican elected in 2019, received the vaccine on Jan. 13, even though his age group isn’t eligible under Mississippi guidelines. He broadcast his inoculation on Facebook, telling residents the health department advised him to get the shot early to show others it’s safe. “Now is the time,” Reeves said. “So we can convince people. We’ve heard, ‘If the governor won’t take it, I won’t take it.’”

Only 11.8% of Mississippians have received their first shots, below the U.S. average of 13.1% and the sixth lowest in the country, according to the Bloomberg Vaccine Tracker.

In Colorado, Polis and his partner Marlon Reis, who have both recovered from mild Covid cases, were vaccinated in January after senior state officials were afforded eligibility under a “critical government worker” category. “I’m putting my own arm where my mouth is and getting it myself,” Polis, a Democrat elected in 2018, said on Twitter.

The move was criticized by the state’s two largest newspapers. “Jared Polis joins the vaccine-line-skipping elite who bring their significant others along,” wrote a columnist in the Denver Post.

Texas Governor Greg Abbott, 63, also drew criticism after he became one of the first governors to get the shot in late December. Abbott, a Republican, kept most businesses open throughout the pandemic as Texas notched the highest number of Covid cases in the nation after California.

Abbott defended his decision to get inoculated while the state was just beginning to vaccinate health-care workers and other priority groups. “I will never ask any Texan to do something that I’m not willing to do myself,” he said at a televised vaccination in December. ”So I’m going to step up, I’m going to take the vaccine, and show you everything is going to be just fine.”

Only 11.3% of Texans have received their first vaccine doses, the lowest percentage of residents in the country after Utah and Tennessee, according to the Bloomberg Vaccine Tracker.

Most of the governors holding off on getting the vaccine are under 65 and say they will get the shot when their age group qualifies under state-eligibility rules. That includes Democrats New Jersey Governor Phil Murphy, 63, who underwent surgery last year to remove a cancerous tumor on his kidney, and Minnesota Governor Tim Walz, 56, who said he will “get it when he comes up in line as a Minnesotan and will not jump the line as an essential worker,” a spokesman said.

Only three governors who qualify under general state eligibility rules have opted to wait. During a Feb. 11 briefing, Pennsylvania Democrat Tom Wolf, 72, said he doesn’t want to “butt in line” even though people age 65 and older qualify to get the vaccine. South Carolina Republican Henry McMaster, 73, and Nevada Democrat Steve Sisolak, 67, have said they are postponing vaccination after contracting Covid.

Virginia Governor Ralph Northam, 61, said at a Jan. 6 press briefing he’d get vaccinated “when my turn comes.” Five days later, the Democratic governor became eligible to receive the vaccine as an “official needed to ensure continuity of government,” according to spokesperson Alena Yarmosky. Still, he decided to wait to “ensure access for the most vulnerable Virginians first,” Yarmosky said.

New York Governor Andrew Cuomo, 63, said he won’t get the vaccine until the shots reach his age group in Black, Hispanic, and poor communities statewide. The majority of vaccine recipients in New York so far are White, according to state demographic data.