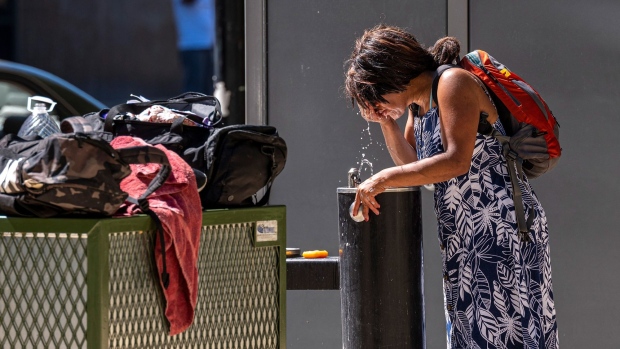 A resident splashes water onto their face during a heatwave in Sacramento, California. Photographer: David Paul Morris/Bloomberg , Bloomberg

(Bloomberg) -- Three power grids serving more than 40% of Americans have issued alerts warning of searing heat sweeping across the U.S this week that threatens to strain operations.

The California Independent System Operator asked power-plant and transmission owners to restrict maintenance through Thursday, allowing for as much capacity as possible to remain online to meet demand. Other grid managers made similar requests in the mid-Atlantic until Tuesday evening and in the Midwest through much of Wednesday.

Heat advisories are in place from Montana and stretch southeast across the central U.S. to Alabama and Georgia. The worst of the heat will peak Tuesday and Wednesday across the northern and central Great Plains and linger days longer across the south, said David Roth, a senior branch forecaster with the U.S. Weather Prediction Center. California will get hotter through the course of the week, too.

The severe weather warnings come as power grids struggle to maintain or bolster reliability operations amid the growing threat of climate change and increasing intermittent renewable supplies. Grids in California and Texas were tested this summer when a surge of heat in June sent demand soaring earlier than normal.

Weather forecasts for Texas have tempered and the state’s main grid operator no longer expects demand to climb to a record on Aug. 2.