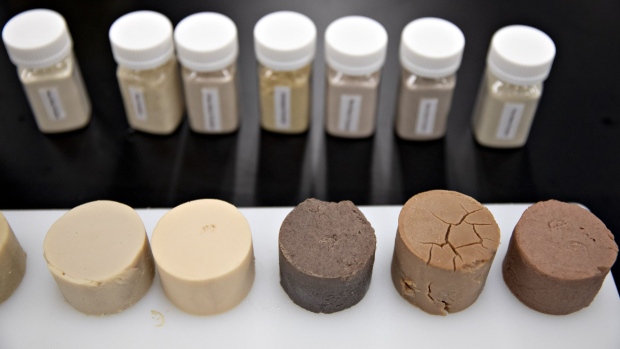 Powdered and gel protein samples at the Archer-Daniels Midland Co. (ADM) Science and Technology Center in Decatur, Illinois, U.S., on Tuesday, Dec. 3, 2019. The nutrition business was key to the ADM's ability to weather the pandemic. While supply chain disruptions initially hurt many of its commodity rivals, ADM has seen a jump in demand for probiotics and other such products as consumers focus on boosting their immune systems in a virus-stricken world. Photographer: Daniel Acker/Bloomberg , Bloomberg

(Bloomberg) -- U.S. supermarkets will see another plant-based meat competitor squeeze onto shelves crowded by the likes of Beyond Meat, Impossible Foods and Tyson Foods Inc. brands.

Archer Daniels Midland Co. plans to launch its first plant-based U.S. portfolio through the PlantPlus Foods joint venture with Brazilian beef producer Marfrig Global Foods SA, according to Global Foods head Leticia Goncalves of ADM’s nutrition unit. While details haven’t been disclosed, the executive said the firm’s strategy differs from what it did in Latin America by going beyond conventional meatless products such as veggie meatballs and burgers.

“Americans are open to new formats that don’t exist in the animal segment, like meals prepared with plant-protein ingredients,” Goncalves said.

Besides the retail market, the strategy is to extend to food services in the U.S., where many restaurants have not only one meatless item but an entire plant-based menu, she said.

The $10-billion global plant-protein industry is forecast to triple during the next decade, with the world’s biggest meat producers including JBS SA and Tyson increasingly getting involved in a growing market dominated by alt-meat companies such as Beyond Meat and Impossible Foods. More than half of conventional meat eaters are diversifying to alternative proteins, according to research from ADM, which has turned its focus to the segment as a way to diversify from its volatile legacy business of buying and shipping crops.

The Chicago-based company is also working to expand its alt-meat business outside the U.S. ADM has talked with potential partners in Europe to not only provide ingredients or technology for plant-based products, but also to make goods that local food companies can sell under their own brand.

“We are working with all the big meat producers in Europe at the same way we started in the past with Marfrig,” she said.

ADM has ultimate plans to expand its presence on shelves outside Latin America and the U.S. with its own brand, though the main business is still supplying solutions and ingredients to clients that produce their final products.

“We are exploring potential partners for the future,” she said. “We are first making PlantPlus to be a success in Americas before taking this step.”

The PlantPlus Foods partnership was approved by regulators about a year ago and the first products started selling in May in Latin American supermarkets and food clients including sandwich chain Subway and Outback restaurants. The joint venture has seen double-digit sales growth each month since its launch, following the growth in the region’s overall alternative-meat market, according Roberto Ciciliano, head of ADM Nutrition in Latin America.

“We see this market taking off in the next three years in the region, after the pandemic has delayed this growth pace a bit,” he said.