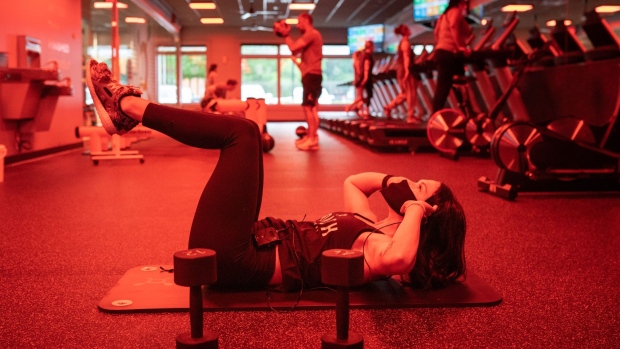 An employee hands out disinfectant wipes during a class at an Orangetheory Fitness gym in Atlanta, Georgia on May 27. Photographer: Elijah Nouvelage/Bloomberg , Bloomberg

Reopening in early May seemed too much, too soon for Mike Doolittle, who owns a 24-hour gym in Tulsa, Oklahoma, named Styrka after the Swedish word for strength. But it’s worked out well so far, with business mostly back to normal.

“Turns out that being a small, uncrowded gym is a boon for us in the market right now,” Doolittle said. “The only real loss is that some of our personal trainers have chosen to do in-home training, as they may have elderly clients who don’t feel comfortable coming to a gym.”

His comments echoed those of small fitness clubs across Georgia and Oklahoma — among the most aggressive U.S. states in reopening their economies —  who reported that 75 per cent or more of their customers have returned over the past weeks. In most cases, those clients are behaving, keeping distances and wiping down their equipment.

While some members are slower to return and other clubs are folding because their business is no longer viable, anecdotal evidence suggests that hard-core fitness addicts rushed to get back to their sweat-filled gyms as soon as they could.

Gyms are among businesses that are closely watched for signs of economic recovery after being among the first to reopen in some Southern states. Across the nation, fitness clubs rocked by COVID-19 closures face a swell of bankruptcies with more than US$10 billion of revenue wiped out as clients ditch memberships, according to investment bank Harrison Co. Globally, Lexington, Massachusetts-based market researcher WinterGreen Research estimates the fitness and health club industry could shrink to US$45 billion this year from US$85 billion in 2019 — assuming people would be slow to return to packed gyms.

A few weeks of business in Georgia or Oklahoma is too early to draw conclusions, especially in a country divided politically about the pandemic. The earliest states to reopen, conservative politically, weren’t as hit by the coronavirus as in regions in the Northeast that remain mostly shut down. Data on the coronavirus, which can incubate for 14 days in asymptomatic patients, are also premature. In Georgia, the number of cases has increased as more people got tested, while hospitalizations -- perhaps a better gauge -- are down.

Nonetheless, some clubs that have opened reported encouraging news after spending heavily heavily on disinfectants or ultraviolet light lamps to clean their equipment and bathrooms.

In Cartersville, Georgia, roughly 80 per cent of the customers have returned to BodyPlex Fitness Adventure, and the club has sold about 100 memberships in the past month, manager Keith Turner said. The only group noticeably staying away are the seniors, who for now aren’t showing up for their SilverSneakers fitness program for older adults, he said.

In Lithonia, Georgia, business is starting to pick up at Pro-Fit Fitness and Rehab, which reopened two weeks ago to a slow start. Normally, owner Kevin Peoples could count on his two trainers dividing up 20 customers every hour for group sessions. For now, as many as 12 customers are dropping by each hour.

“As long as we use Lysol, we'll be perfectly fine,” Peoples said.

Orangetheory Fitness, a Boca Raton, Florida-based chain, has reopened 377 of its more than 1,300 studios, most of which are in the U.S. A survey of members showed that 84 per cent are likely to return when their local clubs reopen, Chief Brand Officer Kevin Keith said.

”We’ve had tremendous demand,” Keith said. “What we are trying to do is manage this demand.”

And back in Tulsa, Matt Giuliano has seen about three-quarters of his active customers return to Beyond the Gym, which counts both regular gym customers and patients of Giuliano’s separate physical therapy clinic.

“The gym junkies who can’t stand not being in the gym, they were the first to rush back,” Giuliano said. “The general people were more slow to come back.”

For Josh Jarmin, it wasn’t enough. He folded his Blueprint Fitness in Atlanta after finding out that only half of his 100 clients might return. The gym, which he’s owned for eight years, was offering small-group personal training.

“I was getting feedback that a lot of clients were buying equipment and training from their home and doing online programming,’’ Jarmin said.  “About a month into it I realized it was the nail in the coffin.”

Urmston Lowe, the gym insurance underwriter, has about 13,000 customers and expects a relatively small percentage to close for good. Many more, though, are struggling with confusing state guidelines, she said. Some states, for example, ask gyms to take people’s temperatures, but are less clear about how gyms should record those temperatures and whether doing so violates rules around people’s health-care privacy.

In the past, communicable diseases weren’t covered by a gym’s liability policies because of the difficulty of proving where a person caught something. However, there’s concern that could change with COVID-19 and contact tracing, she said.

“It is new water for us,” Urmstom Lowe said. “It’s not known how courts are going to come down on a pandemic.”