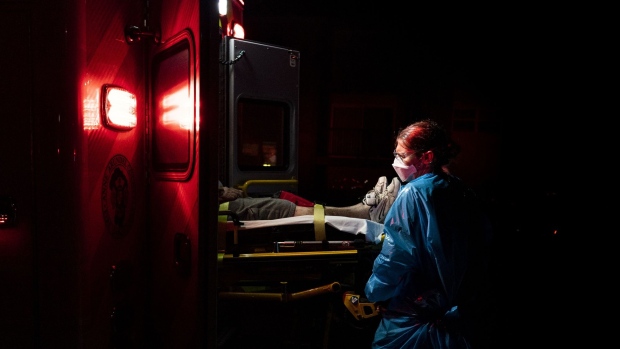 A paramedic wears protective gear while placing a person experiencing Covid-19 related symptoms inside an ambulance in Brooklyn Park, Maryland, U.S., on Wednesday, July 22, 2020. The number of confirmed cases of the coronavirus illness COVID-19 worldwide climbed above 15 million on Thursday and the U.S. case tally edged closer to 4 million. Photographer: Alex Edelman/Bloomberg , Bloomberg

The U.S. reported its deadliest day since Aug. 26 while the global death toll from the novel coronavirus moved closer to 1 million. The University of Oxford is resuming trials of an experimental vaccine with AstraZeneca Plc after a halt due to a participant who fell ill.

Trump administration aides asked for the right to read and suggest changes to weekly Covid-19 reports from the Centers for Disease Control, Politico reported.

New cases in Brazil increased by 33,523 to more than 4.3 million, a 0.8% rise that compares with a 0.7% increase over the preceding seven days, according to data on the Health Ministry’s website.

The virus claimed 814 more lives, bringing the death toll to 131,210, the world’s second-biggest after the U.S.

Colorado Governor Jared Polis extended the state’s mask-wearing requirement for another 30 days through Oct. 12, according to Denver-based 9news.com and other news outlets.

An amendment now waives the face-covering mandate for people performing “life rites” such as weddings, funerals, graduations and religious ceremonies, according to the report. The executive order has been in force since July 17.

U.S. health department spokesman Michael Caputo and other aides asked for the right to read and suggest changes to weekly Covid-19 reports from the Centers for Disease Control, Politico reported.

Communications aides from the U.S. Department of Health and Human Services complained to CDC Director Robert Redfield that the agency’s reports would undermine President Donald Trump’s upbeat messaging about the pandemic, according to the report, which cited emails and people familiar.

While CDC employees pushed back against changes to the Mortality and Morbidity Weekly Report, a document for medical professionals and the general public, they have increasingly allowed political appointees to review the reports and agreed to amend language in some cases, Politico said.

HHS Secretary Alex Azar said in a statement that Trump “has always been receptive to the data and science presented by me and other members” of the Covid-19 task force. CDC officials didn’t respond to a request for comment.

The seven-day average of daily new cases in Wisconsin reached 1,043 in state data published Saturday, the highest level since the start of the pandemic.

This week brought three of the state’s four highest daily tallies yet, a surge the data suggest was driven by 18-24 year olds. Twelve newly reported virus-related deaths increased the toll to 1,209.

President Donald Trump and Vice President Mike Pence are scheduled to make separate visits to the battleground state next week as part of their re-election campaign.

Hungarian Prime Minister Viktor Orban plans to keep all business sectors ranging from sports and culture to tourism up and running despite a surge in coronavirus infections.

Authorities reported a record 916 new cases on Saturday, which Orban said will probably rise further in the current “mass infection” phase. The number of deaths can still be contained without a nationwide lockdown by looking after the elderly, Orban told public television in an interview.

However the use of masks in stores will be strictly enforced, and the government may consider other restrictions like limits on the opening hours of bars.

France reported more than 10,000 new coronavirus cases on Saturday, the largest daily increase since the end of the country’s lockdown in May, a day after Prime Minister Jean Castex warned of a “clear worsening” in the spread of the virus.

Cases rose by 10,561 over 24 hours, according to data from the public health agency published online. The seven-day rolling average stands at 8,029 and has been steadily climbing for almost four weeks.

Deaths rose by 17 to 30,893 on Saturday, the government reported. That’s after health authorities on Friday reported the biggest increase in daily deaths since mid-July, partly due to the inclusion of several days of data from retirement homes.

JBS Foods Inc., the world’s largest meat producer, was issued a $15,615 fine for failing to protect staff from the coronavirus in a Colorado facility where six workers have reportedly died.

The fine from the Department of Labor’s Occupational Safety and Health Administration, announced late Friday, came one day after U.S. regulators issued a penalty of $13,494 for a similar infraction by Smithfield Foods Inc., the first sanction against a meatpacker connected with a deadly Covid-19 outbreak.

The fine levied against Smithfield drew outrage as inadequate from two senators, a former safety official and a major national union. OSHA said it was the maximum allowed by law.

Arizona on Saturday reported 605 new virus cases, a 0.3% increase to 208,128 that was above the prior seven-day average of 0.2%. The Arizona Department of Health Services recorded 27 new deaths, pushing the toll to 5,315. The state’s daily death tally has remained under 100 for more than two weeks.

The U.K. reported 3,497 new coronavirus cases on Sept. 12, a second day with more than 3,000 new cases, as new infections hover at levels not seen since late May. Nine new fatalities were also reported.

Italy reported 1,501 new cases on Saturday, compared with 1,616 the previous day. There were six additional deaths, lower than the 10 deaths reported on Friday. The numbers remain distant from the pandemic’s peak of 6.557 new infections in a day on March 21. Total cases reported since February rose to 286,297.

National Heath Service staff have protested in London and some other English cities, calling for a 15% pay rise, according to the Press Association. Organizers of the protests said that health care workers would consider a strike if the government didn’t respond to their demands.

Nurses and junior doctors were excluded from a wage increase for public sector workers announced in July because of prior agreements.

New York reported 849 cases, its second straight day with more than 800, but the 0.2% rise was in line with the average daily increase of the previous seven days. Another two deaths were reported.

Florida reported 661,571 cases Saturday, up 0.5% from a day earlier, compared with an average 0.4% increase in the previous seven days. That amounts to 3,190 new cases, according to the health department report, which includes data through Friday.

Oxford University said it was resuming U.K. trials of the coronavirus vaccine it’s developing with AstraZeneca Plc. The trials had been placed on hold after one of its participants fell ill.

The university gave the information in a statement on Saturday. It had paused the trials due to an illness in one participant.

Police in Denmark said additional restrictions may have to be introduced after the country posted 341 new cases of coronavirus, the highest daily tally since April 7.

U.S. deaths related to Covid-19 increased by 1,215 on Friday, making it the deadliest day since Aug. 26, according to data compiled by Johns Hopkins University and Bloomberg.

Some of the world’s biggest oil traders are gearing up for a possible resurgence of a coronavirus-induced glut of crude and fuels, snapping up giant tankers for months-long charters so that they can be ready to store excess barrels if necessary.

The chartering spree is likely to alarm Saudi Arabia, Russia and their allies as it indicates that the oil traders believe the crude market is moving into a surplus after OPEC+ managed to create a deficit earlier this summer with its output cuts.

City officials in Turkey’s most populous city have forbidden boating companies from hosting weddings and similar gatherings, AP reported, after concerts and open-air festivals were banned across the country following a spike in cases.

The Philippines recorded a surge in deaths caused by Covid-19, after having to take into account 126 fatalities that had been incorrectly classified, according to data the Health Department released Saturday. The country added 4,935 new Covid cases as of 4 p.m. Saturday, bringing the total to 257,863 cases. The Manila metropolitan area accounts for about half of the country’s cases.

Canada reported no new deaths from Covid-19 for the first time in six months, according to the latest data from its public health agency. The country last reported zero daily fatalities on March 15. Canada is seeing its death toll plateau after fatalities spiked above 200 on several days in April and May. The total death count stands at 9,163 as of Sept. 11, according to the government’s data.

Iran’s fatalities surpassed 23,000 on Saturday with 116 additional deaths in the past 24 hours. The number of cases rose by 2,139 overnight to 399,940, the latest data by the Health Ministry showed. Iran recorded an average of 125 deaths and 2,182 new cases per day over the past seven days.

The United Arab Emirates reported 1,007 new coronavirus cases on Saturday, an all-time high for the Gulf nation of almost 10 million people, where daily cases last peaked in late May. Authorities have urged residents to follow social distancing measures and the government has expanded testing.

Belgium on Saturday reported 969 new coronavirus cases versus 877 the day before, bringing the total to 91,537. Deaths from the virus rose by two to 9,919, while 28 more people were hospitalized.

Prime Minister Boris Johnson’s government is considering introducing fines for people who breach self-isolation rules as new cases surge, the Times reported on Saturday, citing an unnamed government source. The change would end the voluntary nature of people self-isolating with symptoms and bring it into line with strict quarantine rules for travelers.

The Telegraph reported that the events industry is “staring into the abyss” because of the government’s new ban on gatherings of more than six people. Events organizers are seeing mass cancellations and expecting many job losses, the newspaper said.

Italy’s financial-market regulator, Consob, closed its office after its head Paolo Savona tested positive for coronavirus. He is asymptomatic and working from home, according to a statement. Offices will remain closed and employees will be smart working until Sept. 18.

Italy reported 1,616 new cases on Friday, compared with 1,597 the previous day and slightly higher than the previous seven-day average of 1,454. Ten deaths were reported, in line with Thursday’s numbers. While Lombardy, the original epicenter, still accounts for a large part of the infected, summer travel resulted in the region around Rome recording the highest number of hospitalized patients.