U.S. hiring downshifted abruptly in August with the smallest jobs gain in seven months, complicating a potential decision by the Federal Reserve to begin scaling back monetary support by year end.

The unemployment rate fell to 5.2 per cent from 5.4 per cent.

The median estimate in a Bloomberg survey of economists was for a 733,000 monthly advance in August. The yield on the 10-year Treasury note rose, while the dollar fell and the S&P 500 opened lower. 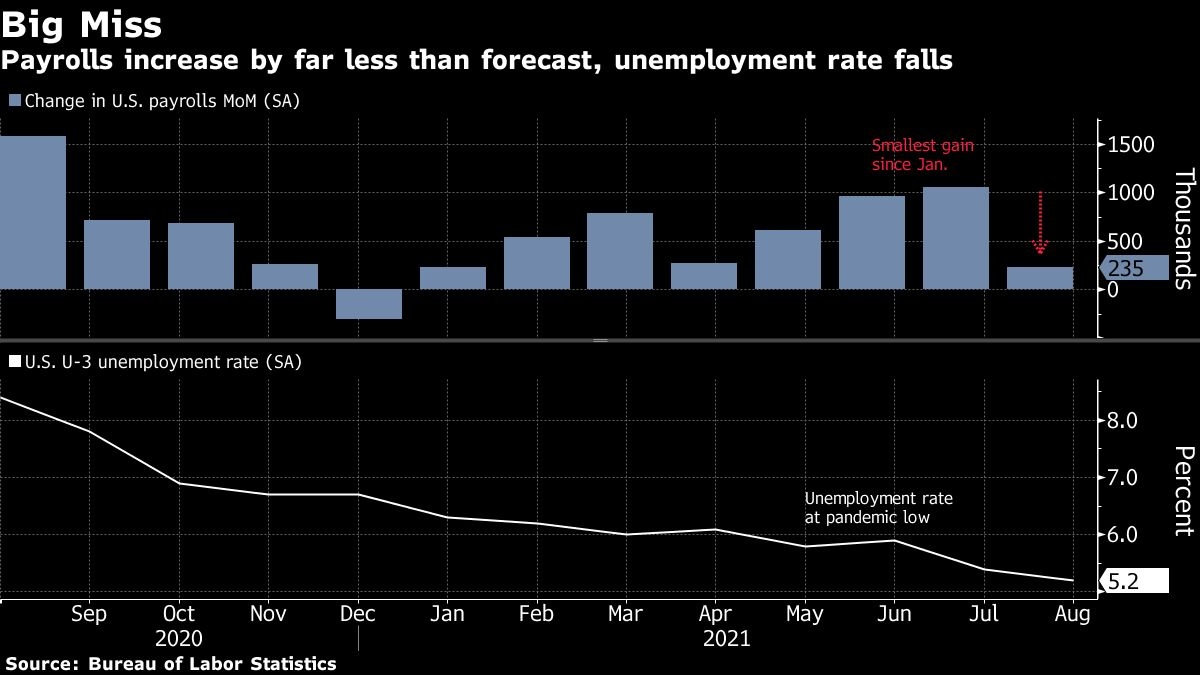 The deceleration in hiring likely reflects both growing fears about the rapidly spreading delta variant of COVID-19 and difficulties filling vacant positions. In August, 5.6 million people reported they were unable to work because of the pandemic, up from 5.2 million a month earlier, the Labor Department said.

The surge in infections, which has already curbed consumer activity and disrupted in-person schooling and return-to-office plans, may have led businesses to grow more cautious about hiring and dissuaded some workers from pursuing high-contact employment opportunities.

The latest figures have the potential to limit calls for the Fed to start tapping the brakes on its monetary stimulus. The report could also bolster President Joe Biden’s push for trillions of dollars in long-term social spending, after West Virginia Senator Joe Manchin, a pivotal Democrat, this week demanded a “strategic pause” on the plan.

Employment in leisure and hospitality was flat in August, held back by a 42,000 decrease in payrolls at restaurants and bars. Retail trade, construction, government and health care employment also declined last month.

Fed officials, including Chair Jerome Powell, have emphasized the importance of the monthly employment reports as a guiding metric for the timing of when to begin reducing its asset purchases. The disappointing report reinforces the central bank’s data-driven approach to the timing of tapering.

“Before delta, we were looking for 1 million-plus payroll gains in the fall, but that’s now going to be a real struggle, suggesting that Chair Powell will be in no hurry to be pushed into tapering while the labor market picture so uncertain,” Ian Shepherdson, chief economist at Pantheon Macroeconomics, said in a note.

U.S. payrolls are still 5.3 million below their pre-pandemic level.

Meantime, the participation rate -- the share of Americans who are employed or looking for work -- was unchanged last month at 61.7 per cent and remains restrained by persistent child-care challenges and virus concerns.

Many economists and parents had pointed to September as the month when those factors would have largely abated, but the delta variant has pushed back that timeline. Uncertainty remains over the path of the virus. While hospitalizations are starting to fall in recent hot spots, there is concern about it spreading to other parts of the country.

Attracting and retaining employees has been a massive challenge for businesses ranging from restaurants and retailers to manufacturers and builders.

As a result, companies like Amazon.com Inc. have raised wages and offered one-time bonuses to attract candidates. Kohl’s Corp. announced bonuses for hourly workers who stay with the department store operator through the holiday season.

Earnings have risen in recent months as businesses raise pay to attract candidates. Overall average hourly earnings rose 0.6 per cent last month, twice as much as forecast though possibly a reflection of the composition of August employment. Average weekly hours were unchanged at 34.7 in August.

The report comes just before the Sept. 6 official end of the supplemental pandemic unemployment insurance programs. Roughly half of U.S. states ended the benefits early in an attempt to assuage worker shortages.

Labor market data from individual states have shown little indication the actions have materially boosted employment so far, but some companies have attributed increases in applications to the expiration of those benefits.

The unemployment rate fell for every major demographic group except Black Americans, which saw a pickup to 8.8 per cent. That’s partly a reflection of increased labor force participation. For women age 25 to 54, the participation rate edged down.