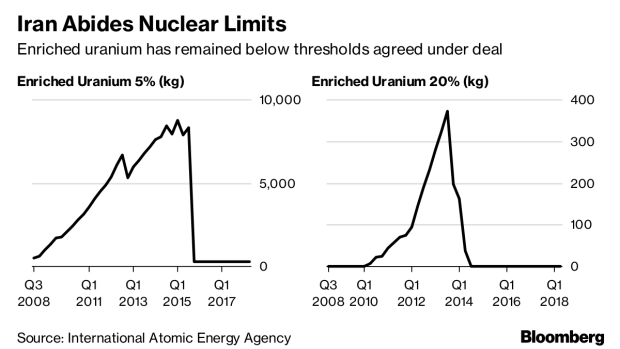 (Bloomberg) -- The Trump administration is pushing to re-open a special investigation into the military dimensions of Iran’s past nuclear work. But it’s not gaining traction among the international officials who can make it happen.

American officials have been ratcheting up pressure at the International Atomic Energy Agency in recent weeks, threatening new sanctions and advocating for more aggressive inspections, according to documents obtained by Bloomberg and interviews with diplomats.

However, the efforts are falling flat, say three diplomats who participated in a meeting convened next to the U.S. IAEA embassy last week in Vienna.

It’s a rare pushback for the U.S. at the IAEA, whose inspectors have been instrumental getting past UN sanctions applied against Iran. The episode illustrates the rising difficulty American officials face in convincing allies to follow the U.S. on Iran.

The diplomats at the Vienna meeting asked not to be identified in return for discussing details of the private Jan. 20 briefing attended by 70 diplomats assigned to the IAEA, the body charged with verifying the 2015 nuclear deal between Iran and world powers that U.S. President Donald Trump abandoned in May.

“There is a sense that the administration is frustrated that their campaign to renegotiate the deal isn’t working,” said Ellie Geranmayeh, a senior fellow at the European Council on Foreign Relations. “What we see is the U.S. maximum pressure campaign is heating up even further.”

The basis for Bolton’s allegation was an analysis by two long-time opponents to the Iran deal -- The Foundation for Defense of Democracies and the Institute for Science and International Security. Using new data supplied by Israel, part of a larger cache allegedly stolen from Iran last year, the Washington-based researchers have claimed they identified a previously unknown Iranian nuclear facility, along with gaps in IAEA reporting.

The revelations require the IAEA to “reinvigorate its investigation of Iran’s past, and possibly on-going, nuclear weapons program,” according to documents distributed at the meeting and obtained by Bloomberg. The U.S. wants more information reported about the sites being inspected and is threatening sanctions on IAEA technical cooperation projects with Iran, according to a separate document seen by Bloomberg and distributed to diplomats in Vienna last month.

The IAEA also declined to comment. It ended a 12-year investigation of Iran in 2015, concluding that scientists undertook studies related to nuclear weapons before 2009 without ever advancing to make a bomb.

The diplomats said that the Israeli data reinforced the need for a nuclear deal with Iran, which gives inspectors real-time monitoring of nuclear material from cradle to grave. They pointed to the record level of IAEA snap inspections called in Iran, as well as three years of monitoring reports that show Tehran has stuck to its side of the bargain.

“There has been a concern that the U.S. and some other countries want to precipitate an inspection crisis,” said Geranmayeh, who advises European governments on Iran. “But there’s been resistance to this. The deal’s stakeholders feel they have a good grip on what’s happening in Iran.”

Since the U.S. left, the deal’s remaining powers -- China, France, Germany, Russia and the U.K. -- have struggled to provide the sanctions relief promised when Iran agreed to nuclear caps. While a European special purpose vehicle designed to protect companies from U.S. sanctions is expected to be ready within days, it’s faced delays and skepticism that it can successfully convince companies to trade.

Iran’s nuclear chief, Ali Akbar Salehi, said this week that Iran is ready to re-start its enrichment program using more advanced technology if the agreement fails, according to Iranian newswires. The country is considering manufacture of nuclear fuel used in naval propulsion systems, implying it may ramp-up uranium enrichment levels closer to the purity needed for weapons.

The diplomats in Vienna said that while they will continue engaging with the U.S., they want to avoid provoking a scenario that will escalate into a new crisis with Iran. Forcing the IAEA to rehash 20-year-old information could shut the doors to diplomacy and lead to “tragic consequences,” one envoy said.

To contact the reporter on this story: Jonathan Tirone in Vienna at jtirone@bloomberg.net

To contact the editors responsible for this story: Reed Landberg at landberg@bloomberg.net, Andrew Atkinson, Flavia Krause-Jackson