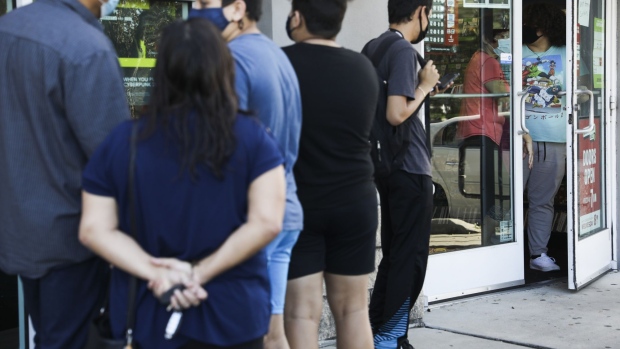 (Bloomberg) -- Don’t let the empty Black Friday parking lots fool you. This holiday shopping season still looks like it’ll be one for the record books.

Adobe Analytics, a tracker of digital sales, says every “Cyber Week” day from Thanksgiving on broke records for online spending. Customer Growth Partners’ President Craig Johnson, who’d been forecasting 5.8% growth this holiday season to a record $749 billion, now says spending in the final two months of the year may actually rise by nearly 7%. The shopping may have started weeks earlier than usual and billions of dollars more of it took place online, but the overall trend is certainly up.

“We’ve been predicting it will be a decent Christmas for months, but we didn’t realize it would be this strong,” Johnson said. “There’s an extra $1.2 trillion in people’s pockets versus a year ago. It’s like dry powder to spend for Christmas.”

Americans are snatching up everything from yoga pants to video games to air fryers — the kind of items that will keep homebound shoppers dressed, entertained and fed as the U.S. braces for a long winter of social distancing. External monitors and keyboards are also in demand for those looking to upgrade their work-from-home set-up. GameStop Corp., one of the few retailers to do a brick-and-mortar release of newest video game consoles this year, even saw shoppers camp out in Thanksgiving Day lines in a throwback moment reminiscent of Black Friday of the early aughts.

High-end handbags and jewelry — items to “bolster a sense of self-worth” — are also having a big holiday, said Doug Stephens, who runs consulting firm Retail Prophet. That’s because Americans who canceled vacations and fancy dinners all 2020 long are sitting on loads of extra cash — at least the ones who kept their jobs. “It's a tale of two cities; for consumers whose jobs are secure, they can jump online and have stuff sent to their doors. Another part of the population is living on the margin right now.”

The boom in overall spending is what retailers needed to bounce back after a challenging year that saw weeks of spring shutdowns, millions of worker furloughs and dozens of big-name bankruptcies, from J.C. Penney Co. to J.Crew Group Inc. Even with stores seeing half their normal foot traffic, the unprecedented surge in online orders is more than offsetting weakness in malls and shopping districts.

“We could be on track for the strongest holiday season in 20 years,” Matt Shay, president of the National Retail Federation, said in an interview on Black Friday. The trade group will release its estimates for holiday-weekend performance on Tuesday.

In an effort to draw smaller physical crowds and avoid turning their stores into super-spreader events, retail executives started the shopping season earlier than ever by offering promotions in October and early November. They also actively encouraged shoppers to buy online and pick-up their goods in stores, rather than spend time browsing in person. It wasn’t just goodwill: Margins are lower when items have to be shipped, so retailers are pushing curbside, and hard.

Adobe Analytics, which had been expecting as much as $12.7 billion in spending on Cyber Monday in the U.S., said preliminary results were a bit lower than that after retailers started to entice people to shop earlier in the season to avoid capacity problems. Nonetheless, Cyber Monday is still on track to set another record for online spending in a single day, topping the $9 billion spent on Black Friday and up as much as 21% from a year ago.

The shift online meant Black Friday wasn’t the shopping frenzy of long-lines and door-busting Americans have grown accustomed to. At the Macy’s Inc. flagship in New York, the largest department store in the U.S., it looked like a normal day, and malls across the country were subdued. Visitors to stores declined by 52% on Black Friday, according to preliminary data from Sensormatic Solutions. On Thanksgiving Day, store traffic plummeted 95%, with most major retailers opting to shut their doors on the Thursday holiday for the first time in years.

Some shoppers hit the mall anyways. Even though many retailers took precautions — Walmart Inc. limited the number of customers inside its stores to just 20% of usual capacity, for example — there were still lines reported at stores across the U.S. including Lululemon Athletica Inc., Bath & Body Works and Urban Outfitters on Black Friday. Gabriella Santaniello, founder of retail research firm A-Line Partners, said teenagers in particular went out to shop in person, though that may have been more for the social aspect after months cooped up inside.

“A lot of teens want to be at the mall to look at the merchandise, and look at each other,” she said in a phone interview.

Most in-person shoppers were in-and-out, with nearly everyone who showed up making a purchase, boosting what retail watchers call the “conversion rate.”

“They want to make each trip count; especially with Covid, you don’t want to just go idly to a store or just do window shopping,” analyst Johnson said. “There are very few things that will stop American consumers from spending when they want to spend.”

The major general merchandise sellers like Amazon.com Inc. and Walmart are set to be the big winners this year with their strong e-commerce platforms and distribution networks. But even small businesses without the logistical muscle of their larger kin may prove surprisingly resilient.

They’ve coped by using social media and online shops to drive business. Black Friday sales shot up 75% to a record-setting $2.4 billion for the million or so independent businesses that use the e-commerce platform Shopify globally.

Small Business Saturday, a nationwide marketing campaign started by American Express in the wake of the 2009 financial crisis, helped draw shoppers into independent stores. Steering money to these shops has grown more urgent as pandemic-related shutdowns across the country pushed millions of small firms over the edge.

Consumers have gotten the message, said Rachel Lutz, owner of the Peacock Room, a women’s clothing boutique in Detroit. Sales at the Peacock Room and its sister store were about 20% better this past weekend than any previous year, with people snapping up self-care items like tiaras, shea butter hand cream and “anything with a swear word on it,” she said.

The Detroit City Distillery is another brick-and-mortar business that’s been forced onto the internet to survive Covid. The whiskey factory and cocktail lounge has supplemented a street-side bar with bottle releases online, and it’s doing more business because of it. It’s already sold over half the stock of its honey bourbon that went on sale on Black Friday, said Ian Redmond, the tasting room manager.

“We’re not going to stop doing it, I tell you that,” Redmond said in a phone interview Sunday. “We’re going to keep the online store going hard now and forever.”