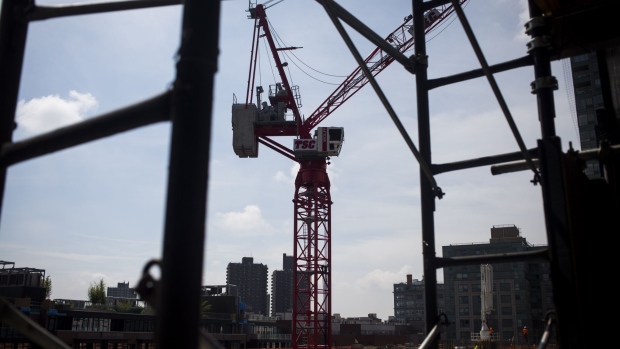 A crane operates on top of the 420 Kent Avenue apartment development during construction in the Williamsburg neighborhood of the Brooklyn borough of New York, U.S., on Friday, July 28, 2017. , Bloomberg

Residential starts jumped to an annualized rate of 1.19 million, according to a government report released Friday. That matched the median forecast in a Bloomberg survey. The month-over-month increase was the biggest since October 2016, while the rate remains 4 per cent below the level in June 2019.

Applications to build, a proxy for future construction, climbed 2.1 per cent to a 1.24 million rate, missing estimates. The Commerce Department said single-family starts rose 17 per cent compared with a month earlier.

Builders were hammered when the coronavirus outbreak shut down the U.S. economy in March and froze the real estate market. But the stocks of those companies have rallied, with an index that tracks the industry closing on Thursday at its highest level since March 4.

The tumble in mortgage rates, which dipped below 3 per cent this week, has fueled a flood of applications for loans to purchase homes. But with with virus cases spiking across the U.S., there are fears that the economic recovery could stall.

High unemployment and a possible second wave of COVID-19 are also risks for the housing market.

Inventory of existing homes has been tight as some sellers, wary of listing amid the shaky economy, have stayed on the sidelines. That means new houses are taking a bigger share of the market, according to Matthew Pointon, U.S. property economist at Capital Economics.

Buying a new home is a convenient option during a pandemic because so much can be done without leaving the house, from virtual tours to getting a mortgage from the builder, he said. And some buyers are eager to leave cities and move to the suburbs where new home communities are sprouting, he said.

“Homebuilders will be keen to ramp up production -- their confidence has already bounced back from the dip,” Pointon said. “Some people prefer getting a newer, cleaner home rather than a dirty old one because of the virus.”