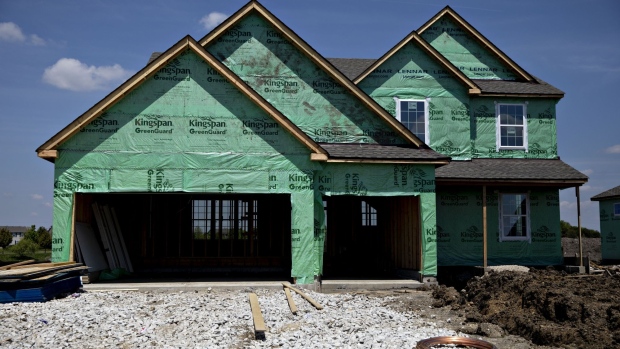 Workers lift a wall frame in a home under construction at a K. Hovnanian Homes development in Plano, Illinois. Bloomberg

Homebuilder sentiment in the U.S. climbed to the highest level since February of last year as cheaper borrowing costs and a still-sturdy job market lifted measures of prospective buyer traffic, sales and the demand outlook.

The National Association of Home Builders/Wells Fargo Housing Market Index rose three points to 71 in October, marking the fourth straight advance and exceeding all but one estimate in a Bloomberg survey of economists, data released Wednesday showed. The last time the gauge increased in as many consecutive months was June-September 2014.

• Builder optimism increased in the South, the biggest U.S. region, to a 14-year high, while sentiment in the West was the strongest since the start of 2018.

• Thirty-year fixed mortgage rates that are close to three-year lows, helped by a pair of cuts in the Federal Reserve’s benchmark lending rate, are offering support to a residential real estate market that slowed in 2018. At the same time, the market remains constrained by lean inventories of affordable properties.

• A measure of current home sales rose to the highest since January 2018, while a gauge of prospective buyer traffic was the strongest since February of last year, according to NAHB, a Washington-based trade group with more than 140,000 members.

“The second half of 2019 has seen steady gains in single-family construction, and this is mirrored by the gradual uptick in builder sentiment over the past few months,” Robert Dietz, NAHB’s chief economist, said in a statement. “However, builders continue to remain cautious due to ongoing supply side constraints and concerns about a slowing economy.”

• The NAHB’s index of builder sentiment in the South climbed 3 points to 76, while the gauge of confidence in the western U.S. rose by 7 points, the most since December 2017, to 83. Sentiment slipped in the Midwest and Northeast.

• The six-point increase to 76 in the six-month outlook was the largest since December 2016.

• Readings above 50 indicate that more builders view conditions as good than poor.

--With assistance from Reade Pickert